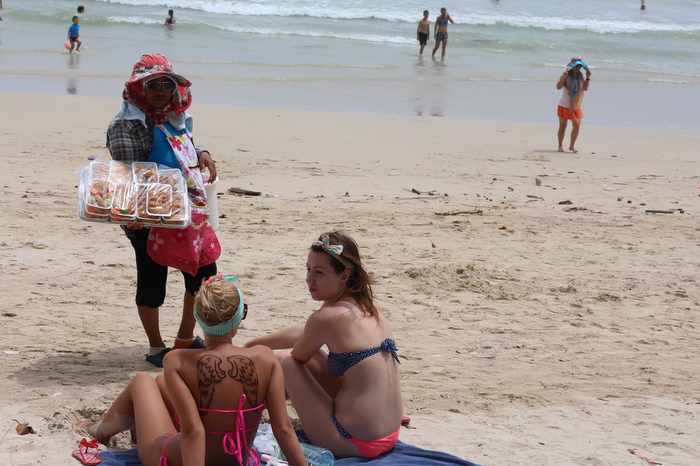 PHUKET: The more than 1,000 Patong beach vendors dislodged from the sands today have been promised a meeting with Patong Municipality and Army officials to discuss how they may continue earning a living without encroaching on public land.

The vendors were served eviction notices yesterday and given a Friday deadline for removing all illegal structures from the beach. More permanent structures, such as the restaurants near Loma Park, have an August 1 deadline.

The vendors have been forced to remove their structures from Patong Beach as part of a beach management order handed down from the National Council for Peace and Order (NCPO).

The announcement of the meeting, which will take place at some point following Asanha Bucha Day (Friday), came after more than 100 vendors surrounded Patong Mayor Chalermluck Kebsab and Kathu District Chief Sayan Chanachaiwong when they arrived to inspect the beach clean up this morning (story here).

“A group of vendors confronted them about solutions to their sudden unemployment. I do not believe this was a planned protest,” said Col Somchai Ponatong of the Royal Thai Army’s 41st Military Circle.

“A lot of the vendors also approached me to voice their concerns. We have acknowledged their problems and will try to find a way to help them.”

About 60 beach chair operators, 300 masseuses, 500 jet ski operators and 95 beverage vendors lost their jobs today. The names of all unemployed vendors have been sent to Patong Municipality.

While officials bolt together a plan for the future, displaced vendors have been told they can continue operating their businesses as long as they do not build any new structures on the beach.

“Our goal was to move buildings encroaching on public land, it was not to take away jobs,” said Mr Sayan.

“The vendors have the right to continue working as long as the work does not involve construction, and as long as the structures they use are mobile.”

Beachgoing tourists bearing witness to the event voiced their own opinions to the Phuket Gazette.

“Thank you for returning Patong to the way it was 32 years ago,” said Brian Hardaker from Australia.

“I have been coming here five times a year for 32 years, and I have seen so much change. Now, the beach is back to normal and I think more people will want to come here.”

Another Australian tourist, however, had a different opinion.

“I don’t understand the reason for the cleanup, the vendors never bothered me,” said Bianca Lipari from Sydney.

“When I came here, I expected to see many vendors on the beach. I want to be able to support the local people.

“Now they have all gone and I have nothing to do on the beach. I could have spent an entire day here but now I can only spend a few minutes. I hope the government brings them back as soon as possible, so I can come back and enjoy my vacation properly.”