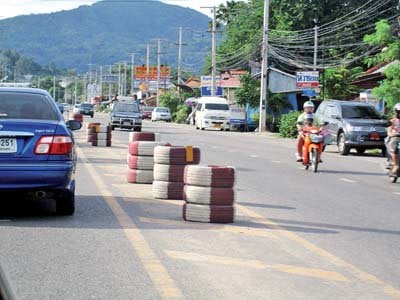 “We have installed these stacks on the median of dangerous sections of road,” explained Chalong Police Station Superintendent Col Krittapad Dej-intorrasorn, who formerly went by the name of Wichit Intorrasorn.

“The tyres work very well at night. They help reflect light and encourage drivers to slow down,” he added.

The rubber barriers have been set up at traffic accident “black spots”, such as the entrance to Soi Koktanode on Chao Fa West Road and the first curve heading up Kata Hill from Chalong to Kata.

Some locations will be upgraded to have permanent median strips installed, such as from Baan Chalong School to Chaitaram Temple (Wat Chalong).

Col Krittapad said the number of reported accidents and the number of fatalities at all sites where the rubber tyres have been set up had fallen since the medians were installed.

“The number of road accident deaths has fallen by almost 100 per cent compared with the same period last year,” said Col Krittapad.

Last year, four people died in accidents at the black spots in July alone. There were no traffic-accident deaths at any of the locations in July this year, he said.