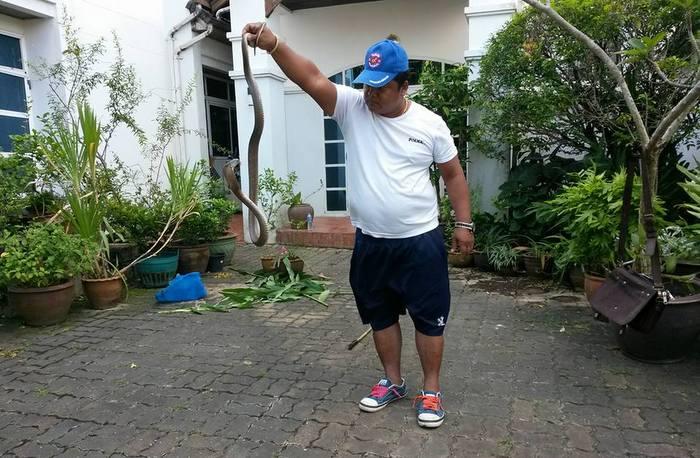 PHUKET: A Wichit resident was given a surprise front-row view of a performance by Phuket Ruamjai Rescue Foundation Chief Saiyan Thamaphan, who charmed a cobra that he was trying to capture yesterday morning.

Rescue workers were called to a house near Wichitsongkram School at about 8am by a resident complaining of a cobra in her garden.

“I learned a long time ago how to calm snakes down and put a ‘spell’ on them,” said Mr Saiyan. “The snake was very angry when I first got there.”

It took about 10 minutes for Mr Saiyan to calm and capture the approximately 2-meter-long cobra with his bare hands.

In the last two months, the Ruamjai Foundation has been called on to deal with more than 30 snakes in the area.

“I am glad that the house owner called us rather than attempting to catch it herself,” added Mr Saiyan.

The cobra was later released into the Nakkerd Hills.

Anyone who encounters a snake or other potentially dangerous creature is advised not to confront or disturb the animal, but to contact the Ruamjai Foundation at 076-283346 or the Kusoldharm Foundation at 076-246216 or 076-211706. It is recommended that the caller be able to speak basic Thai.