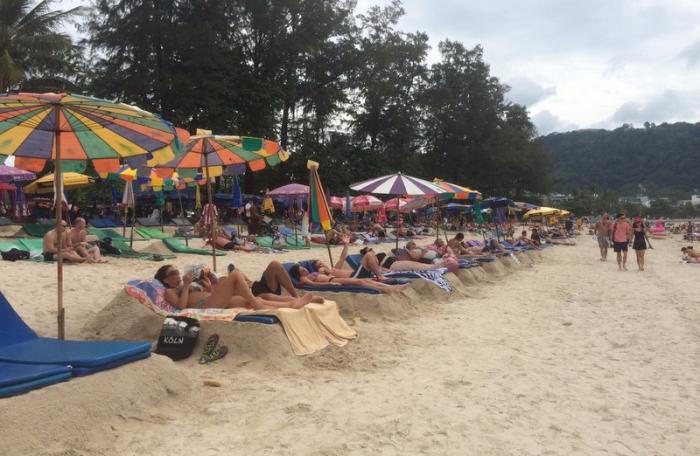 PHUKET: The Royal Thai Navy has overturned the Patong Mayor’s ruling regarding beach mats laid out on raised beds of sand at Patong Beach, and declared that they are, in fact, “illegal”.

Rear Adm Pisai Sukawin, deputy commander of the RTN Third Area Command, handed down the verdict at a meeting yesterday afternoon, saying that regardless of the beds being in the 10 per cent zone, they will no longer be allowed on the beach.

“Some vendors have been setting up mats outside of the 10 per cent zones, and in order to avoid these problems in future, we believe it best to remove them entirely,” said R/Adm Pisai.

Other officials in attendance at the meeting included Phuket Vice Governor Snith Sriwihok as well as officers from the army, police and local beach management ‘authorities’.

The issue started after pictures of beds built solely of sand (with beach mats for tourists atop them) went viral on social media, with thousands of people sharing and celebrating the ingenuity of uneducated local villagers who were making a mockery of the rules against “beach loungers” (a.k.a. “sun beds”) on Phuket’s beaches.

Patong Mayor Chalermluck Kebsup addressed the complaints by declaring the sand beds to be legal, saying that as long as the vendors offering the beds were operating inside the designated 10 per cent zones, they, along with their mats, would be allowed (story here).

Mayor Chalermluck clarified the issue at the meeting, saying that they were only set up to deal with tourist demand and that current beach management rules did not meet the vendors’ needs.

“These raised mats are convenient for tourists visiting the beach, especially older ones who like to be more comfortable. However, I agree that they detract from the beauty of the area, especially at night,” said Mayor Chalermluck.

“We can get rid of the sand beds, but I feel it would be beneficial to allow regular beach loungers inside the 10 percent zone. They could be stashed away at night to maintain the aesthetic beauty of the area. This would be the best compromise as both tourists and vendors will get what they want,” she added.

However, the meeting ended without any conclusion regarding her suggestion.

“For now, no more sand-beds are allowed. However, we will take the mayor’s suggestion about beach loungers into consideration,” said R/Adm Pisai.