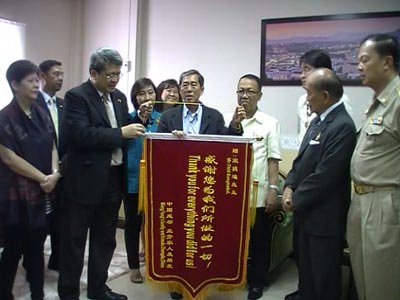 PHUKET: The action by authorities following the drowning of a Chinese tourist in Krabi’s Than Bok Khorani National Park has drawn praise from the Royal Thai Consulate in Chengdu City, China.

Chengdu Consul-General Narumit Hinshiranan on Monday visited Krabi Governor Prasit Osathanon in person to express gratitude on behalf of the people of Sichuan province for the assistance given to relatives following the drowning of Wang Fang, 32.

At Krabi City Hall, Mr Narumit presented Governor Prasit with a “thank you” pennant for the people of Krabi province from the Chinese people in appreciation of their warm-hearted action.

Ms Fang was snorkeling with friends off the Hong Islands (Koh Lao Bileh) on February 21 when her friends discovered her floating face down and unconscious in the water.

National Park officers rushed her to Krabi Hospital, where she remained unconscious in the Intensive Care Unit (ICU).

“Ms Fang’s family arrived in Krabi on February 23 and met the doctors at Krabi Hospital,” he said.

However, the long distance from Krabi to Phuket and Ms Fang’s poor condition made moving her to Phuket impossible. Instead doctors from Bangkok Hospital Phuket were sent to Krabi Hospital to provide treatment.

Ms Fang, who had not regained consciousness, was still unable to breathe unaided.

She remained in Krabi Hospital’s ICU for two days before her family instructed doctors to switch off the life-support equipment.

Krabi Hospital gave the cause of death as permanent brain damage.

Tour operator staff and others took time to arrange the funeral and to look after Ms Fang’s relatives.