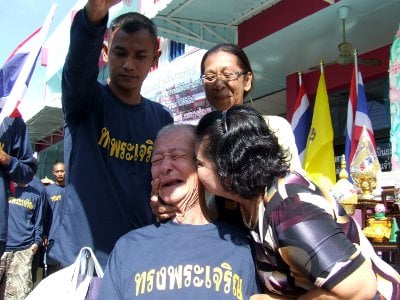 PHUKET: Over 150 inmates were released from Phuket Provincial Prison this morning following the Royal Pardon decreed by HM The King on the occasion of his 84th birthday on December 5.

Phuket Governor Tri Augkaradacha and Phuket Provincial Prison Director Rapin Nichanon presided over the release ceremony this morning, when 155 inmates were freed. A Buddhist monk was on hand to sprinkle holy water over the former inmates, all of whom joined in a tribute to HM The King.

Another 295 inmates still inside also had their sentences reduced under the terms of the pardon, which was only granted to inmates with good behavior records.

All of the inmates released today, 146 men and nine women, had less than one year left on their sentences. Among those freed were a small number of foreigners, including an Afghani man and Iraqi couple charged with forgery, as well as three Laotians and four Burmese caught residing in the Kingdom illegally.

“Tomorrow, 15 more inmates will be released, all of whom had more than a year remaining on their sentences,” said Prison Director Rapin.

The prison provided inmates from distant provinces, such as those in the North and Isarn, with sums of money ranging from 500 baht to 600 baht in order pay for their transport home.

After today’s release there were 1,535 inmates remaining behind prison walls, more than double its design capacity of 700. Some 80 per cent are serving sentences on drug-related convictions.

Asked about the risk of recidivism, Director Rapin said there would always be a percentage of released inmates who would get back into to trouble with the law. He said he expected the number to be small, however.

For many, the release was followed by joyous family reunions. Ex-convict Wicharn Ardhan, released after serving 10 months of a one-year sentence on a theft conviction, was happily greeted by his wife, 8-year-old daughter and 3-year-old son.

A 69-year-old disabled convict cried with joy as his relatives greeted him with his wheelchair.

A 45-year-old mother cuddled her nine-year-old son following her release. “I was sentenced to one year following the judge’s ruling on my embezzlement case, but thanks to the Royal Pardon I have been released three months early,” she said.

“I’m am very happy to get out the prison. I will never do that again, even though doing time there is not that bad because it is kept quite tidy,” she said.

Her son said that he really missed his mother, who he had not seen in three months.

A 21-year-old released one month early, after serving three months on an assault conviction, had a similar view. “It was not difficult to stay in the prison, but I am definitely not going back inside again,” he said.

A 48-year-old inmate, released nine months early on an 18-month sentence for theft, had big plans for his new-found freedom. “I am very happy to get out and I am going to take part in the King’s Cup Regatta sailboat competition tomorrow,” he said.