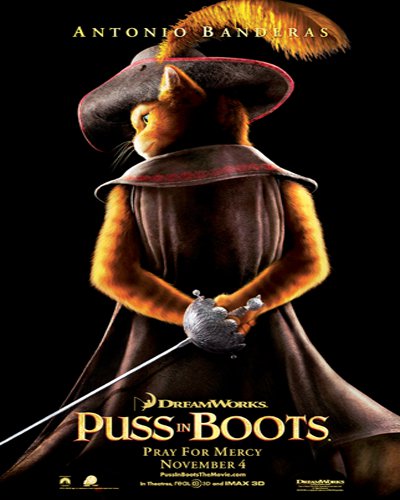 PHUKET: From the Shrek movies comes the popular Puss in Boots character voiced by Antonio Banderas with the addition of Kitty Softpaws (Selma Hayek) and Humpty Alexander Dumpty (Zack Galifianakis) who are trying to avoid Jack (Billy Bob Thornton) and Jill (Amy Sedaris).

The usual funny scenes and lines with cat references are there, but there are also many dramatic, fast and entertaining sequences which are enhanced by the 3D. Like the Shrek movies various fairy tales are sourced such as “Jack and the Beanstalk”

This is a movie that kids and adults can enjoy and as a stand alone movie could be close to being good as the first two “Shrek” movies. The plot is pretty simple yet enjoyable to watch.

The voice acting is very good and the character Kitty Softpaws adds to the feline theme. Puss in Boots really is the character that carries this movie.

On a negative note though the story just didn’t seem developed enough and thus the whole thing comes off as more of an eye candy with it’s fluid CGI and action. But overall the positive outweigh the negative and to sum it up, it’s a good family flick just not a great one. Sad to know that I didn’t even know Puss in Boots was a real fairy tale and not just some character that popped up in the “Shrek” series.

It’s a mixture of action, sad flashbacks, cuteness (seeing Puss as a kitten is adorable!) and giving him a stand alone film is an interesting idea.

The movie is fun and often hilarious. The cat jokes are clever. with some impressive scenes. The 3D is great and the scale is large b ut it loses some momentum in the second half and is a bit too predictable in the end.

Although the film is pretty enjoyable it could have been a lot better – maybe they are saving that for a sequel.