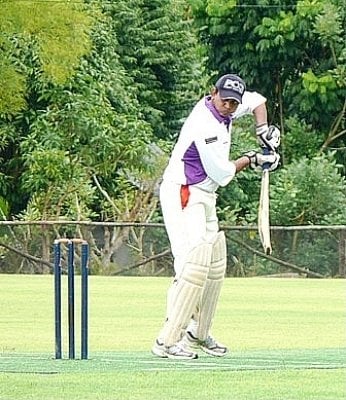 Following an upset against Laguna in the first match of the season, Patong were determined to get their league campaign back on track.

However, a number of key players were not on the team sheet due to injury including Anthony Van Blerk and Dean Noble.

This being ICC’s first match of the season, a good start was needed if they were to improve on last year’s performance

Downpours overnight delayed the start of play by almost half an hour, but when umpires Foster and King called for the teams to begin, Patong, after winning the toss, put ICC into bat.

The early dismissal of A. Khan (7) by Anil Rawat with the score on 15 boosted the Patong bowling attack before opener Anand Chand, now joined by I. Kahn, moved the score along to 46.

Accurate bowling from Manish Sadarangani frustrated ICC and Khan’s growing impatience was punished when he was caught at mid on trying to hit down the ground.

Mehra was next to the crease, but could only add 6 runs in six overs before being trapped lbw by Sadarangani. With the score at 67 for 3, Chand was holding his team’s innings together.

But his efforts came undone 17 balls after Mehra’s dismissal when he was caught at mid off by Kishor Jhagta who may have even foreseen the catch given his wild celebrations.

It was a decent captain’s knock for 23, but support from the remaining ICC batsmen ensured his efforts were for nought.

The ICC innings all but collapsed from a score of 69 for 4 to 125 all out after 32 overs which took just under two hours to conclude.

Seemant Raju’s bowling was a highlight of Patong’s attack with only 7 runs scored off his 4 overs. During his four wicket haul, Raju nailed the middle stump twice to whip it out of position without disturbing either off or leg stump – a beautiful sight for any bowler.

Manish Sadarangani’s excellent line and length was rewarded with 4 wickets for 27 runs off 8 overs.

Patong’s chase began with Richard Desmond and Seemant Raju whose focus was to make the first drinks break at 10 overs without losing their wickets.

Desmond’ new found style of leading with his front foot paid dividends, and with Raju playing a support role the pair pushed the score to 49 by the first target.

Both batsmen were still there at the 20 over mark with the score at 91 without loss and the target within reach.

Two overs later, an exhausted and injured Desmond reached his 50 and went on to score 54 which included three 4’s and a six. He was eventually dismissed with the score on 111 (or Nelson – a number and its multiples held in superstition by English cricketers which allegedly refers to Lord Horatio Nelson’s missing body parts – one eye, one arm, one leg) caught off the bowling of Chand.

Hyams and Raju rattled off the remaining runs in the 27th over with Patong also taking a bonus point in the process for their clinical performance with the bat.

Man of the match was awarded to Seemant Raju. Richard Desmond and Manish Sadarangani taking 2nd and 3rd respectively.

The league standings currently see Patong on top with 8 points after two games. League newcomers Thanyapura Tigers are in second and the Village are third, but both are equal on 6 points after one game.

Laguna sit in fourth place with five points after just one outing, while the Leopards, Lizards and the ICC have a single bonus point to their credit after one match.