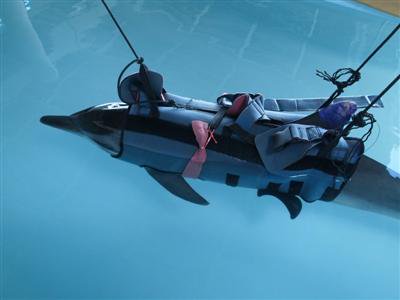 PHUKET: The ailing striped dolphin that was under treatment at the Phuket Marine Biological Center (PMBC) died last weekend, two weeks after she washed ashore in Phang Nga.

Despite round-the-clock treatment that included the fitting of a harness to help her swim, the female dolphin took her last breath on August 12.

“We took good care of this dolphin and monitored her all the time. Our only hope was that she would fully recover and could then be released back into the sea,” he said.

“Unfortunately, she suffered from pneumonia, a lung abscess and a systematic bacterial infection,” he added.

“The dolphin was suffering from a systematic bacterial infection, not a viral infection,” he said.

“At the moment, we only have two sea turtles at our treatment unit. They are doing fine and will be able to go back to the ocean soon,” he said.

The two turtles, both of the Pacific Ridley species, were found beached and covered in oil in Phuket and Phang Nga in recent months.