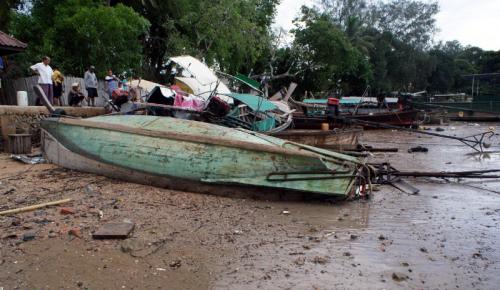 PHUKET: Heavy weather wreaked havoc on the Krabi coast, across the bay from Phuket, flipping over 60 long-tail boats and injuring at least two this afternoon.

“One tourist was reported injured, and was transferred to Phi Phi Hospital. We don’t know the extent of the injuries yet,” he told the Phuket Gazette.

Half an hour later, Mr Thalerngsak received word that heavy winds and high waves had hit the shore of Ao Nam Mao Beach in Krabi, turning over 50 long-tail boats that had also been anchored close to shore.

“One boatman was injured at Ao Nam Mao Beach and taken to Krabi Hospital,” Mr Thalerngsak said. “Our officers have gone to inspect the damage and help salvage the boats.”

Less than two weeks ago a large freak wave damaged 15 boats on the shores of Koh Phi Phi (story here).