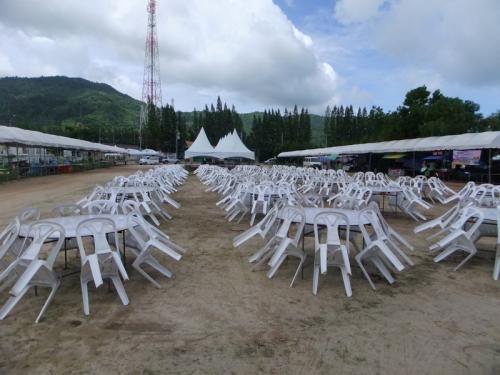 PHUKET: The Alhamdulillah Talk-show Festival, expected to draw over 20,000 participants, is underway in Cherng Talay and will be running until midnight Sunday – rain or shine.

“There will be talk shows about Islamic teachings and philosophy at the festival. We want to introduce Islam to the world, not just as a religion but also as a way of life,” Muhammad-Ali Ramaboot from White Channel Corporate Strategy said.

“The only thing many people know about Islam is our way of dress, but we are trying to change that by bringing the teachings out of the mosque and to the public,” he said.

The festival will be held from 4pm to midnight Saturday and Sunday at the back court of the Cherng Talay Tesco Lotus. Though many of the talks will be in covered areas, attendees are encouraged to bring umbrellas.

This unique festival has drawn crowds of 8,000 to 15,000 people when held in other southern provinces and in Bangkok. However, having had the support of the Cherng Talay OrBorTor, event organizers hope to hit a new all-time high for attendance in Phuket.

“Promoting religions, no matter what religions, is one of our duties,” Cherng Talay OrBorTor President Ma-ann Samran said.

“With the help of the local Islamic mosques, the festival in Phuket will be the largest of its kind,” he added.

In addition to lectures on Islamic teachings and philosophy, well known Thai singer Firdaus Satthaying will be performing. There will also be 26 food stands and 50 booths selling a variety of consumer goods.

The event is open to everyone interested in discussing religion and philosophy, while enjoying music and good food, said Mr Ramaboot.