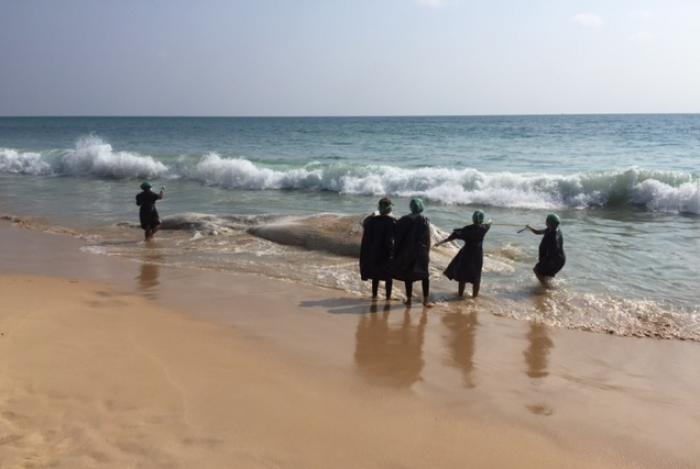 PHUKET: Marine biologists are hoping that the rotting carcass of a five-tonne whale, found washed up yesterday on Lampi Beach, Phang Nga, will reveal clues about how it died.

Phuket Marine Biological Center (PMBC) staff had been looking for the dead cetacean, ever since it was spotted floating off Koh Bon in the Similan National Park by a tourist on April 10 (story here).

“It is a Bryde’s whale, about 13.45 meters long. It has probably been dead for about two weeks, so the body is already in an advanced state of decomposition, with some of the bones exposed,” said Rachawadee Chantra from the PMBC.

Despite the state of the rotting carcass, Dr Rachawadee is confident that they can determine the cause of the whale’s death once it’s transported to the PMBC facility at Cape Panwa, where biologists will perform an autopsy.

“After an examination, the carcass will be buried in a three-meter deep pit lined with lime, and left there for about six months, by which time only the skeleton should remain,” said Dr Rachawadee.

The bones will then be cleaned, so that the skeleton can be used as a museum piece or for educational purposes.