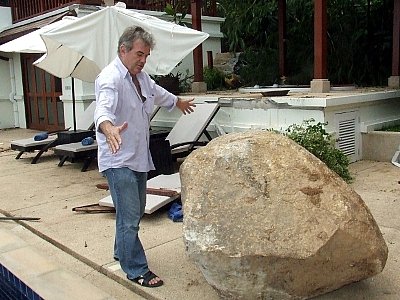 PHUKET: The management of an upscale hillside villa resort in Phuket has filed a police complaint after huge boulders tumbled down from a road construction project last Saturday, causing property damage and frightening guests.

Wassana Yukhunthon, public relations manager at the luxury L’Orchidee Residences off Phra Barami Road Soi 4 at the north end of Patong, told the Phuket Gazette that a room maid cleaning one of the 27 pool villas heard the boulders crash into the unit next door at about 2pm.

“She went to check the house and found that a big boulder, some smaller ones and dirt had fallen down the hillside and into the resort. She called us to come and see what had happened. As we examined the damage, we heard what sounded like a bomb as another boulder crashed into a nearby villa, she said.

“Rushing to see what happened, we found that a two-tonne boulder had rolled down the hillside and into the resort, coming to rest next to a pool,” she said.

As it rolled down, the boulder caused extensive damage to everything in its path: a balcony, cement staircase and floor, trees, sun loungers and a parasol.

“Also, some of the wood shattered by the boulder splintered off and flew like darts toward the road about ten meters below the house,” she said.

Managing Director Jean Jacques Gramond said, “Think what would have happened had people been walking or driving past at the time. They would have been seriously injured.”

It didn’t take long for the resort management to pinpoint the source of the rock slide, Ms Wassana said.

“Our one workers went up the hill via the soi next to Family Mart and PA Cable TV on Phra Baramee Road, about one kilometer away. He found a construction project underway. It looked like they were building a road up the hill.”

According to the report, 34-year-old Prasert “O-pal” Auksornprommarat hired the excavators that were responsible for the damage. Several more dislodged boulders remained up slope, precariously supported by tree trunks.

Mr Prasert agreed to pay all damages by restoring the villas to their original condition and cleaning up all the debris.

Thanachart “Aod” Pibuncharoenpol said, “We were hired by Khun O-pal to operate the backhoes to help build a shrine to the goddess Guanyin. Construction started about five months ago, and it will take a long time to finish,” he said.

Venerated by East Asian Buddhists, Guanyin is a Bodhisattva associated with compassion. Shrines to the goddess built by the ethnic Chinese Thais can be found all over southern Thailand.

Mr Thanachart accepted his own responsibility for the damage.

“The day the rocks rolled down we had a new backhoe operator from Phang Nga who didn’t realize there were some houses down the slope. I didn’t tell him about that, so he pushed the rocks down,” he said.

Paving of the new road is already underway, he said.

He downplayed the risks posed by the dislodged rock still up-slope from the resort.

“The rocks still supported by trees are just small ones, not above knee height. We have been doing this construction for five months and this is the first incident like this we have had, even though it has rained heavily many times,” he said.

“I will not lie to you. A lot of rocks remain, but we have a way of preventing them from going down the slope by digging out small pits to bury them in,” he said.

Ms Wassana said the resort intends to have them do exactly that, but not until an engineer is brought in to assess whether there is any structural damage.

“Actually we told them about that already,” she said.

The Phuket Gazette called Patong Municipality, which is responsible for construction oversight, but was told that they had yet to be informed of any problems at the site.

“The land has the right documents. If it didn’t, I would never have taken my 3-million-baht backhoes up there,” he said.

Ms Wassana said the resort was lucky there were no casualties.

“Nobody was staying in the first house that got hit. Another villa hit by a boulder weighing a few tons was occupied by a British man here for Muay Thai training. Fortunately he was still asleep in his bedroom, as he would normally have been out by the pool at that time,” she said.

“We had to move him to another villa as he fears more rock slides,” she said.

The resort has also had to bear the cost of providing alternative accommodations to seven other families who booked rooms in the area at risk, she said.