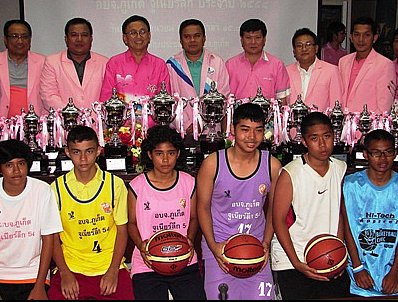 The opening ceremony of the “Basketball PPAO Phuket Junior League 2011” was held at Saphan Hin, Gymnasium 1, on June 25 and the league will run until September 23 with matches starting at 4pm every Friday.

OrBorJor President, Paiboon Upatising, said this week that outstanding players from the two leagues will be invited to train with the Phuket Basketball Youth Squad. Eighteen players have already been selected in preparation for the 2012 Thailand Youth Games to be held in Phuket next March.

“If any of those selected perform particularly well, they may even get funding to continue into university education,” added Mr Paiboon.

The competition is for players under 17 years of age with a boys league of nine teams and a separate girls league with six teams.