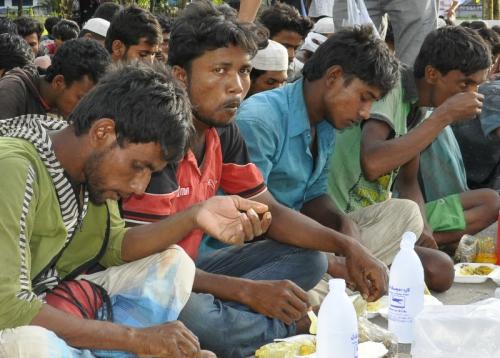 PHUKET: The 179 Rohingya taken into custody north of Phuket yesterday survived on four meals of uncooked rice in their 16 days at sea, one of the survivors told officials.

Local fishermen spotted the refugees – fleeing escalating ethnic violence in their native Rakhine State in Myanmar – off the Phang Nga coast at about 11am.

“They departed Rakhine State in Myanmar on January 7. They were at sea for 16 days, hoping to reach Thailand or Malaysia in order to find work,” Kuraburi District Chief Manit Pianthong said. “They all are exhausted.”

“They said they had only four meals of uncooked rice and water since they left the state,” he added.

The refugees were taken to Kuraburi Community Hall. Nineteen of them were in need of urgent treatment and were immediately placed on saline drips by medical staff.

“Doctors and nurses were called in to take care of them – some of the refugees have fevers and others have open wounds. Doctors have placed them all on a course of antibiotics,” Chief Manit said.

“Officers have to provide them with food, drink and other care before handing them over to Phang Nga Immigration for deportation,” he added.

This latest arrival of Rohingya refugees in Phang Nga follows a welfare shelter in Khukkhak (story here), also in Phang Nga, on Monday calling for donations of daily necessities in order to provide assistance to 46 Rohingya women and children receiving shelter there.