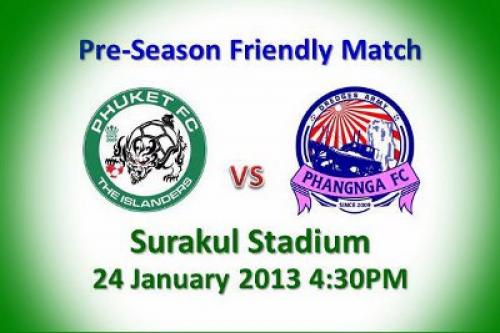 PHUKET: The island’s pro futsal team Phuket United had their Thailand FA Cup dream shattered this afternoon, losing 2-3 to Lampang United in a close match up in Bangkok.

The match was the fifth FA Cup round-of-16 match to be contested at Fashion Island futsal arena on the north side of the capital today and yesterday.

In addition to Lampang, other teams who have already advanced to the quarterfinals include Royal Navy, Chonburi, Highways Department and CAT FC.

The three remaining quarterfinal spots will be decided in matches this afternoon as follows:

Licking their wounds, Phuket United now head on the road to take on top-of-the-table Chonburi TOS RBAC in their 16th match of the GMM Sport Thailand Futsal Premier League 2012-2013 season.

In their first meeting two weeks ago in Phuket, Chonburi narrowly won 3-2.

The match will give fans who missed out on last Saturday’s friendly with Trang, a chance to see the new all star line-up.

Kickoffat Surakul Stadium is at 4:30pm, admission is free for all.

Rohingya: Only 4 meals in 16 days at sea