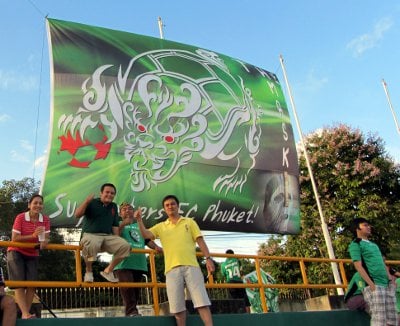 PHUKET: A second-half goal by midfielder Marcio Santos was all Phuket FC needed to snatch three points on the road at Songkhla FC, in a match played in front of a small crowd of fans at Jiranakorn Stadium in Haad Yai.

It was just the second road win of the year for the Islanders.

The goal came when the Brazilian headed home a free kick by new signing Roland “Pato” Vargas in the 68th minute. It was the first game for Pato, a 32-year-old veteran from Bolivia who is a former player of PTT Rayong and Chiang Rai United, and has also played in the Major League Soccer in the US.

Unfortunately, the goal was not captured on the SuperSport highlight clip of the match.

Even more good news for Islanders’ supporters came with surprise that star keeper Alonso Da Silva, previously reported as transferred to Samut Songkram FC, has remained with the team.

Only 418 fans turned up for the match, many of them Phuket FC fans taking advantage of the free bus service to attend.

The small crowd was probably due to the fact that Wua Chon, Songkhla’s team in the elite Thai Premier League, had a home match the same day against Thai Port at Tinsulanonda Stadium in Songkhla Town.

The win is a big step forward for the Islanders, who drew at home against the same Songklha FC on Sunday.

The win lifts the side out of the relegation zone by the narrowest of margin: they now sit in 13th place in the 18-team league, tied on points with Pattalung FC, but ahead on goal difference. The bottom five teams will be relegated to the Division 2 Regional Leagues at the end of the season.

Phuket FC’s next match will be a home fixture against PTT Rayong, who are on a three-game winning streak in which they have outscored their opponents 16-1. This includes a 6-0 drubbing of Phuket FC at home earlier this month.

“Saturday’s game will have a special liking to me,” Santos told the Gazette. “The last game against PTT I did not play…. I really want to win this game. My team is motivated and I’m fairly confident,” he said.

He had to sit out the first match against PTT due to a penalty suspension.

Santos also confirmed that Alonso would remain with the team indefinitely.

“He loves Phuket FCs fans so much,” he said.