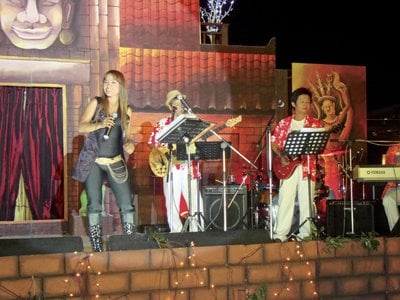 PHUKET: Warunee ‘Gig’ Suwannurak is no ordinary singer. The Phuket-based diva, and recent ‘Thailand’s Got Talent’ sensation tells her story to the Phuket Gazette.

Her powerful delivery of Pink’s (rendition of) What’s Up in the first round of Thailand’s Got Talent competition received a rapturous applause from the spellbound audience.

One of the three judges proclaimed: “This woman will go on to win.”

Within hours of the show, word spread like wildfire about the talent of this unassuming 32-year-old woman from the South who had little education.

The TGT organizers clearly wanted to play on Warunee’s humble background to capture the audience’s imagination. And the ploy worked. The subsequent short clip of her performance posted by fans on YouTube warranted almost two million views within one week.

Her overnight success didn’t last very long. In the weeks that followed, the blogosphere began to dig up her past – tabloid style.

They quickly found out that she had a farang boyfriend and that she had been abroad, (as a picture of her frolicking in the Danish snow showed) and began to question if she was the poor girl they made her out to be.

“I kept myself in for a few days because I couldn’t face the world,” she says, and proceeds to tell her side of the story.

Born and raised in Yala, Warunee left school at the age of 12 and spent a large part of her teenage years working as a cleaner; her parents couldn’t afford to pay school fees for all their five children.

Having always been a keen singer, Warunee found her voice at the age of 18 when she joined a small band that performed in hotels and bars along the border town of Betong in Narathiwat province.

Though understanding little English, she did try her hand at singing English songs by mimicking the sounds made by other singers, at first with disastrous results.

“I was so embarrassed I promised myself to learn English,” she recalls.

A failed marriage and one daughter later, Warunee came to Phuket with another band in 2008. The income from singing in hotels and bars, she recalls, was sporadic at best.

But Phuket may have proved to be her blessing. Things were looking up when she met her Danish partner Soeren, and her new life came complete with a nice house with a pool and zippy little car.

“My life changed after meeting Soeren. I couldn’t ask for a better partner. He is very supportive of my singing.

The accusations that I am well-to-do were not exactly true. I may live a better lifestyle now but I don’t own all these material comforts. What’s more, my father still works as a construction worker.”

So she continues to sing in bars and nightclubs around the island and goes to adult education classes all the while nursing a desire to become a professional singer.

Her first real break came in April, when she passed the first round audition for 2012 Thailand’s Got Talent. She is now among 36 finalists who will battle it out for the semi-final later this month.

This time, she will sing Adele’s famous Rolling in the Deep. She is working very hard to get the pronunciation right and also trying to learn the meaning of the lyrics.

“I will need all the votes from the people of Phuket. I am nervous but deep down I so want to win. My dream is to become a respectable, professional singer. If I win I still want to buy that house for my parents.” The semi-final will be aired live on Sunday.

Phuket Lifestyle: Raise up your glasses (and your expectations)