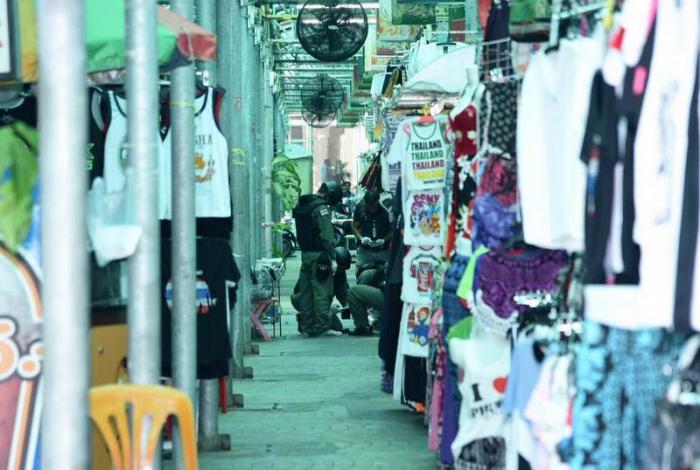 A phone-based explosive device was found in China Town Plaza, near where a security guard recovered a similar device on August 10. The device’s recovery comes in the wake of bombings across Thailand’s south this weekend, that killed four and left more than 30 injured.

Phuket Provincial Police released a sketch of one of the two August 10 would-be bombers on Saturday, using CCTV footage and eyewitness accounts by a store clerk and security guard.

That security guard, named as Kamthorn Ketkaew, is being praised as a local hero after he removed the August 10 device from a crowded shop to a deserted parking lot.

“Two men in surgical masks, hats and gloves came into my shop to buy clothes,” said China Town Plaza shopkeeper Seetala Tanmalathong. “I thought they two were just normal customers. After they left, I went to tidy up the section they were in, when I found a plastic bag with a phone inside it.”

“When I opened the bag, I was shocked to find a phone connected to a power bank with wires and a jelly-like liquid,” Ms Seetala said. “I believed it was a bomb, so I told one of my staffers to drop it into a water bucket, so as to short-circuit the device,” she added.

“After dropping the device into the water bucket, we saw that its light was still on. The staffer then took the bucket in front of the shop and called a security guard,” Ms Seetala said. “The security guard, Mr Kamthorn, quickly carried the bucket, with the device still in it, to a deserted parking lot, before calling for help from police.”

“I was about to go back home, but someone called me to check on what they believed was a bomb,” Mr Kamthorn said. “I didn’t know what to do. I just decided to get the bucket out of there. I thought that if it was a bomb, just me dying would be better than having many others killed.”

“I did not expect anything from this. I just don’t want to see many people, including tourists, die. If I had died, it would have been for a good cause. But luckily, it did not explode,” he added.

For these good acts, Patong municipality rewarded Ms Seetala, her employee and Mr Kamthorn 10,000 baht each.

Managing Director of the Pisona Group and member of a well-known Thai family in Patong, Preechawut ‘Prab’ Keesin, also awarded 50,000 baht to Mr Kamthorn this afternoon.

Mr Preechawut is also offering 100,000 baht for anyone who divulges information leading to the wanted man’s arrest.

“I would like to call on everyone – it doesn’t matter what nationality or religion – to help make Phuket a safer place,” Governor Chamroen said. “Phuket is ours. It is our happiness, and I want to see it as a safe place for everyone to visit.”

The governor’s comments come after the island was placed on heightened alert and more military and police personnel were deployed to public gathering places, checkpoints and government facilities.

“In cooperation with the Royal Thai Navy and Thalang Civil Defence forces, we’ve checked every single vehicle coming into Phuket for the past 24 hours,” Gov Chamroen said.

“At this stage, we have yet to see anything suspicious being brought onto the island. In addition, we have already ordered all the shopping malls to increase their vehicle checks for the public’s safety.”