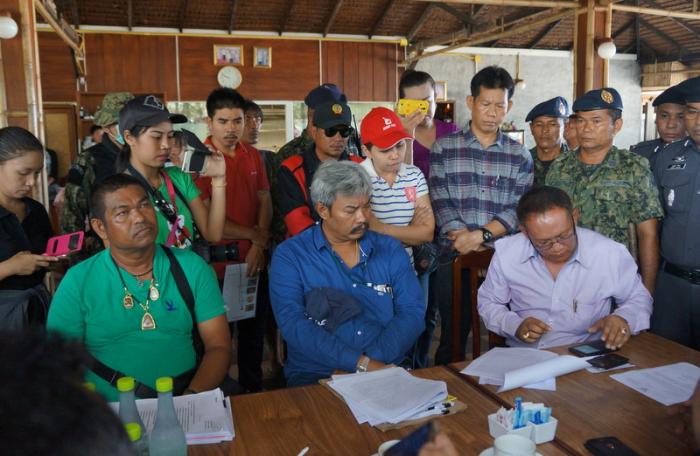 PHUKET: A local restaurant at Lay Pang Beach was demolished yesterday, despite a final effort by the owner to save it from being razed (story here).

Tony Restaurant was torn down after a lengthy explanation by Thalang District Chief Wikrom Jakthee, who read out a court order approving the demolition by the Nakhon Sri Thammarat Administrative Court.

This was the second demolition attempt on the establishment by authorities. In December last year, Tony restaurant was saved from a last-minute demolition by an order from the Ministry of Interior (story here).

“Restaurant owner Kanokpon ‘Tony’ Somrak asked the court to cancel the OrBorTor demolition order, based on his two complaints against them. First was a dereliction of duty complaint against the OrBorTor for not providing the building permit, which he had filed for last year. Secondly, he filed a complaint against Mr Ma-ann, stating that he did not follow the legal demolition process,” said Mr Wikrom.

“The first complaint regarding the alleged dereliction of duty must be pursued in court. As for the second complaint, the court has dismissed it because the OrBorTor did, in fact, inform Mr Kanokpon by issuing official letters and following the exact requirements of the law. However, Mr Kanokpon failed to appeal in time.”

Mr Wikrom also clarified that Mr Kanokpon’s call for protection while the case is ongoing was dismissed by the court, as it was clearly ruled that the OrBorTor was not proceeding illegally in the matter.

Mr Ma-ann also responded to the ‘dereliction of duty’ allegations by saying that he was willing to take up the matter in court.

“I was only doing my job by following the official order of the National Council for Peace and Order (NCPO). I never intended to target anyone and always followed the law at every step,” said Mr Ma-ann.

“Tony Restaurant is the biggest one that still stands on the beach. Most of the remaining illegal venues on Lay Pang and Layan beaches are shacks. Once we demolish this, the rest should be done in a few days,” Mr Ma-ann said earilier.

However, two restaurants on Lay Pang Beach – Beach Bar and Paul restaurant – have survived so far.

“These restaurants are yet to be demolished as their appeals are being processed in the court,” Mr Ma-ann said.

In November last year, Mr Ma-ann was slapped with a 10-million-baht lawsuit filed against him for alleged dereliction of duty by the owners of these two establishments, who claimed that Mr Ma-ann had ruined their businesses (story here).

“Last week, the Phuket Court dismissed their request. However, they have another month to appeal to the Administrative Court in Surat Thani. We will, of course, wait for the court’s decision before taking any further steps,” Mr Ma-ann added.

Vice Governor Chokdee reiterated that the demolition had to be carried out as per the NCPO’s directive, and the law would apply equally to all parties involved.

“Local authorities had ordered Mr Kanokpon to evacuate the premises as early as 2013, but he has continued to operate his business there till now,” said the vice governor.

“It shouldn’t be this hard to get everyone to obey the law. We have demolished most of the other illegal buildings already, and this one should be no exception,” he said.