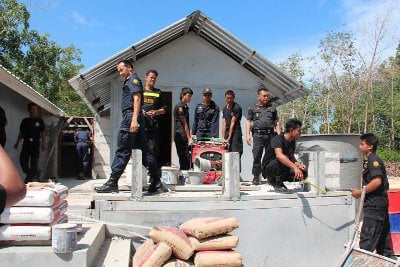 PHUKET: More than 150 officers from the Royal Forest Department (RFD) led raids on three sites in Phuket on Saturday.

In Thalang, officers discovered a resort under construction within the boundaries of the protected Bang Kanoon Forest.

“We found buildings that looked like a resort under construction on land inside the forest. However, there was no one at the site to declare ownership or the purpose of the buildings. So we put up a sign and an official letter asking the owners to remove the entire construction within 30 days,” explained Amnart Sroykyo, head of the RFD regional office for Krabi, Phang Nga and Phuket.

“If they don’t comply within the stated period, we will remove the buildings ourselves,” he warned.

The officers also inspected a site in the protected forest area in the Kamala Hills, but found no one violating the law.

“However, we found one case in the Nakkerd Hills where a person was violating the law by having built a restaurant beside the road just before the entrance to the Big Buddha site,” Mr Amnart said.

“The officers ordered the owner to remove the building within 30 days. The officers are now inspecting other areas of the Nakkerd Hills, since it is land that everyone wants to encroach on due to the location’s many scenic views of the ocean and the hills,” he added.

Mr Amnart said the land encroachment problem in Phuket was “getting more serious with each passing day.”

“Many people have encroached on public land for personal benefit, causing widespread damage to the natural resources of our country. The natural disasters we have suffered [namely, floods] were all due to imbalances of nature,” said Mr Amnart.

In order to prevent any more damage, the RFD Krabi Office and a new unit formed under the ‘Forest Crisis Problem Solving Operations Center’ are working together to inspect encroachment on public forest land in Phuket, he added.

The three sites inspected on Saturday were all targeted specifically because of the large number of complaints received about those cases, Mr Amnart explained.

The Bang Kanoon Forest, which covers nearly 5,000 rai of land in Thalang, was registered as a protected forest area in 1964.

“Since 2003, we have prosecuted people in 69 cases and we have got back 651 rai of land so far. We have allowed five people to use the land for public use, such as building mosques, creating cemeteries, and building public roads.

“Although we allow people to use the land for public benefit, we only allow them to use parts of degenerated forest areas. We won’t permit anyone to use any areas that are rich in natural resources,” he explained.

Mr Amnart warned the RFD raids will continue over the coming long weekend.

“We are going to investigate every part of Phuket until we cover the whole island. We have set up a team to work on it, and we will provide more officers to help during the long weekend,” he said.

“If we find any construction illegally encroaching on public land, we will order that place to be shut down immediately and report it to the police,” he warned.