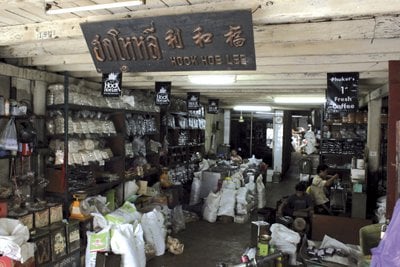 PHUKET: Each cup of coffee served at Hock Hoe Lee has more than 50 years of history steeped inside. It’s a taste to be savored.

Three generations of one Phuket family have worked tirelessly to create the coffee served up today at Hock Hoe Lee, which has shops in town and in Rawai.

Back in 1958, when Chinese migrant Cheng Long came to Phuket by junk from his native land, he had a mat to sleep on and knowledge of how to roast coffee beans. That was all.

He scraped together enough money to rent a small ramshackle shophouse in the heart of Phuket Town’s downtown market.

It wasn’t long before inquisitive Thai-Chinese locals wandered in to sample Mr Long’s coffee, sniffing the plumes of sweet-smelling smoke pouring from the shop. They were hooked and word soon spread of the Chinaman’s magic beans.

He bought his beans from a friend in Penang, Malaysia. To suit demand, he roasted his beans with sugar and started selling cinnamon sticks too.

Hock Hoe Lee, meaning “Lucky” in Chinese, was the moniker Mr Long gave to his shop. As luck would have it, business spiraled and he ventured to Chiang Mai and Ranong to find homegrown beans.

Although the roasting process has been moved out of the original shop to a site nearby, the place still holds much of the charm it did fifty years ago, with bags of fresh coffee piled high, the clang of machines sounding out all day and workers hurriedly bagging beans in bulk. It’s typical of Phuket Town’s hustle-bustle.

Today, the original shop still attracts locals who buy Hock Hoe Lee beans by the bagful, but the brand has sprouted another shop in Rawai and more are planned.

In 2010, Somboon’s daughter Jutamas and her husband Ruengrit decided to build upon the family’s coffee success and opened a new store in Rawai.

Sandwiched between Friendship Beach and Serenity Terraces, the modern shop is pulling in a different clientele: expats and tourists.

“We thought it was time to start making coffee to cater to foreigners,” Ruengrit said.

“The feedback has been great. Thai people walk into the new shop and are surprised to see we are serving espresso coffee and not just Thai coffee.”

“We use the same beans for our Thai and Western coffee, it’s just we roast Thai coffee on a much higher heat, with lots more sugar.”

Ruengrit said that due to the success of the new shop, more shops are planned for the near future.

The secret to the coffee’s flavor is also due to Hock Hoe Lee’s selection of the beans they buy. As far back as 1958, the family has been personally inspecting the farms they use, and the processes the farmers use to keep the beans fresh. They’ve been getting it right for a long time.

For great homegrown coffee with a Phuket history, get down to Hock Hoe Lee in Rawai. Prices are fair and there’s a great snack menu too. Beans by the bag are also on sale.

Phuket Books: Present at the creation