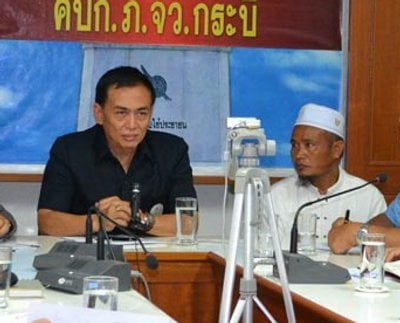 PHUKET: Following the reported drowning of a runaway student, the owner of the Por Noh Klong Gom School during a video-conference with Royal Thai Police Deputy Commissioner-General Adul Saengsingkaew admitted that “improvements” to the school’s management were urgently needed.

The video conference, at Krabi Provincial Hall on Saturday, was in reaction to the drowning and subsequent mass-walkout by hundreds of other students from the youth drug rehabilitation facility two days earlier.

Joined by Krabi Governor Prasit Osathanon and Krabi Provincial Police Commander Jamroon Ruenrom, school owner Anurak Ginglek explained to Lt Gen Adul what had occurred and what steps he was taking to improve the rehabilitation center.

“On July 26, four students attempted to escape from the school. One of them drowned while trying to swim across the Krabi River, and a second received minor injuries resulting from a teacher’s punishment,” Mr Anurak said.

“After the incident, the school’s remaining students chose to leave and requested to be sent home. Now the school is temporarily closed.

“I and the management team will now consider what measures can be implemented to control student and teacher behavior,” he added.

Mr Anurak pointed out that the school buildings needed renovating and the student numbers reduced to a more manageable figure.

“There are currently more than 1,000 students in the school. It’s too crowded,” he said.

Mr Anurak voiced his regret concerning the tragic loss of a student and said he was willing to cooperate with the police in any way he can.

“Many students may lose their chance to get further drug rehabilitation treatment. Some of them have almost finished the rehab program, but with the school now closed they might go back to using drugs,” he said.