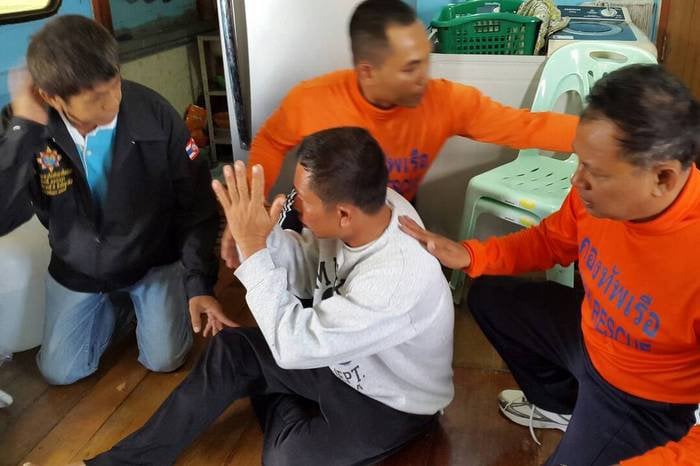 PHUKET: The fourth survivor of a barge that sank between Koh Racha Yai and Koh Phi Phi on Tuesday is being transferred from Koh Ngai, where he was found this morning in weak condition, to Koh Lanta Hospital.

Myanmar national Thar Hlaing, 46, was plucked from the sea and brought to Koh Ngai, southeast of Phuket, by a transport ship heading for Koh Ngai Villa (story here).

“The team said that Mr Thar is very weak from floating in the water for far too long. However, he is not in critical condition like we originally thought. He is conscious and his condition is not worrisome,” Capt Puttiporn Sawatsut of the Royal Thai Navy Third Area Command.

“A team of about five medical officers escorted him to Koh Lanta Hospital, the closest medical facility to the rescue point.”

Three of Mr Thar’s fellow crew members were rescued from the sea off Koh Lanta on Wednesday and early yesterday morning (story here).

Searches by air and sea for the other two crew are ongoing.

“Our teams are still search for the other crew members. We hope to find them alive soon,” added Capt Puttiporn.