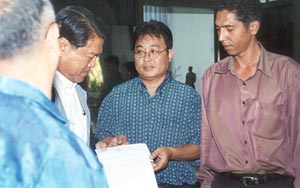 PHUKET TOWN: Vichean Utsa, Chairman of Phuket Reporters Club, yesterday requested Phuket Governor CEO Pongpayome Vasaputi to expedite the police investigation into shooting of local reporter Surapong “Od Patong” Rittee. The call came just 48 hours after K. Surapong, a local reporter for newspapers Thai Rat and Siang Tai, and for Channel 3 television, was gunned down early on Tuesday. He was shot twice in the head at close range. K. Vichean told the Governor that this case was very important because Phuket is an international tourist destination and that the killer scorned the governor’s firearms-free Phuket policy. Gov Pongpayome said, “I’m so sorry for what happened to K. Surapong. Reporters are always digging up and investigating news to publish. Surely many people would not be happy about that. It’s a very risky occupation. “However, the victim was involved in many businesses, and we don’t know exactly why he was killed,” he added. K. Surapong’s business interests included a cigarette dealership, a prawn farm, rental housing and connections with the entertainment industry. Gov Pongpayome said that Police Region 8 had already dispatched a special investigation team to investigate, drawing on Kamnan and Phu Yai Baan connections to help find the killer. “Whoever knows something [about the shooting] could help by contacting the police. I believe that if everyone helps, we will catch the killer very soon. I will help to expedite this case,” the Governor added.