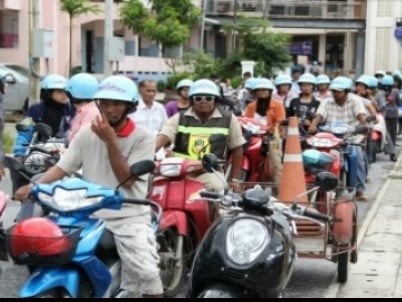 PHUKET: Local government in Phuket is continuing its battle to reduce the number of motorbike accident fatalities and serious injuries that frequently occur to children of school age.

Yesterday, it was the turn of Rawai Municipality to take up the fight at Muang Phuket School on Wisit Road in Rawai.

Phuket Democrat MP Anchalee Vanich Thepabutr presided over the opening ceremony of the event, which focused on driving discipline and the continuing campaign to get riders to wear helmets while on motorbikes.

“This project is a cooperation between Rawai Municipality, Chalong Police Station and the Phuket Land Transport Office, and aims to carry out the government’s policy of making this the ‘Decade of Road Safety’,” said Mayor Aroon.

“The main objective is to encourage people to abide by the law and follow traffic regulations. I want to raise the awareness of all motorcycle users, to wear helmets for their own safety,” he added.

Mayor Aroon explained that motorcycle riders of all ages should understand traffic laws and drive responsibly.

“This is an ongoing campaign with the goal of 100 per cent of motorbike drivers and passengers wearing helmets,” he said.

“This will help reduce the seriousness of injuries that happen in accidents,” he added.