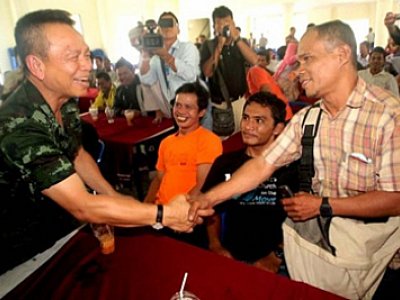 Talks with separatists in South a success: Prayuth
Phuket Gazette / The Nation

PHUKET: One hundred suspected insurgents led by a man allegedly involved in the 2004 military camp raid yesterday met the Fourth Army region commander in Narathiwat to declare they would cease fighting in the strife-torn Deep South.

Army Commander in Chief Gen Prayuth Chan-ocha hailed the historic meeting that took place in the Narathiwat Islam Committee office as a great step forward and achievement by both sides.

The separatist group was led by Wae-ali Copter Waji, alias, Jeh Ali, who has a bounty of 1 million baht on his head for alleged involvement in a notorious raid at an army camp in the same province eight years ago, in which four officers were killed. The raiders snatched a large cache of weapons.

They said they expected to get concrete answers from the government and the Army.

Yesterday’s meeting came as a surprise and it was unclear whether the insurgents had surrendered or not. However, the Army chief said that the talks between Udomchai and the suspected separatists, believed to be members of RKK movement, was considered a great success.

Prayuth said the meeting was the result of coordination on both sides that had worked for sometime until the separatists began to trust the authorities.

“The talk had been prepared for a period of time but we could not reveal it to the public. The coordination was done through their families and society. The Army has always opened doors for them,” Prayuth said.

He believed the RKK members decided to start talking with the Army because they had seen the gruesome violence of the group. They disagreed with the use of violence, so they tried to surrender to the authorities while the group used all means to prevent them from doing that.

“What we want now is for them to surrender to the authorities while the punishment [they face] will be considered later but will be in line with the law,” Prayuth said.

The Army chief confirmed they were the real RKK members, saying checks were done and the results confirmed their status.

“Their names are on the Army’s list and arrest warrants had been issued for their involvement in the unrest in the South. They would have to prove involvement.”

He insisted an investigation would verify whether they were lured to join the group or not.

Meanwhile Aziz Benhawan, chairman of the Advisory Council to Promote Peace in the Southern Border Provinces hailed the meeting as a positive signal for the crisis in the far South.

Although the talks would not immediately end the violence, it was expected to lead to peace and the right direction.

“The talks will send a signal to other RKK members who are active in Pattani, Yala and Narathiwat to reconsider and review their actions and to end their activities.”

The feeling among southerners would certainly be better because this was a light, if dim, pointing to an end to the problem.

He expected to see less violence, but said things would depend on further talks.

Anusorn said there was a total of 158 violent acts in the region in the three months before the extension, 41 less than the previous three-month period.