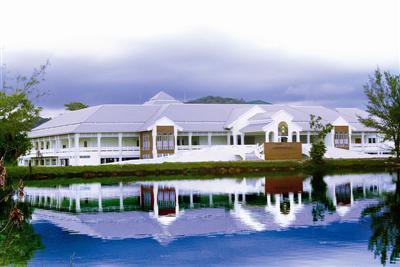 First established as part of the national teacher’s college network in 1971, the school was subsequently elevated to institute status and finally became a full university in 2004.

Thirty years ago, the school had about 100 teachers and only a few buildings. Today, the university has grown to more than 200 teachers supported by an additional 200 support staff, all working in more than 40 buildings spread over more than 350 rai.

The expansion project of five new faculty buildings and a new auditorium aims to accommodate the needs of the growing number of students and staff on campus, located just north of in Phuket Town in Rassada municipality.

The new project is on 11 rai dedicated expressly for the new buildings, not including the auditorium that is almost complete. The venue, which can seat 2,200 people for a single function, is slated to open for use by year’s end.

The entire project is scheduled to take six years to complete, with construction scheduled to finish by early 2012.

Of the new buildings, the new main teaching building stands nine stories high and has an interior area of 10,000sqm. Now nearly complete, the building can house about 3,000 students at any one time.

Four other buildings, each three or four stories high, are currently under construction to house a language and computer center as well as the faculties of industrial technology, health education and science. These are also scheduled for completion by 2012.

Phuket to feature in relaunch of ‘playground’