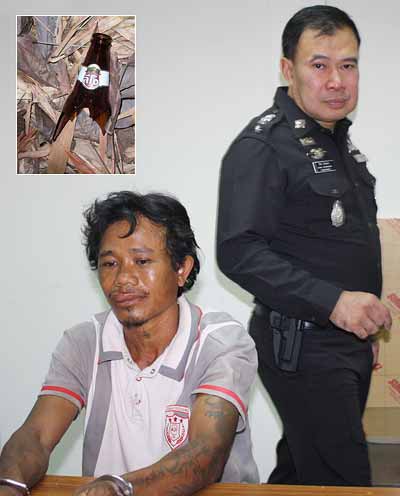 PHUKET: A drunken Lao man was arrested today for killing a friend by slashing his throat with a broken beer bottle. He confessed to the crime, telling police he acted out of rage after the man used his money to buy beer instead of rice whisky.

Chalong Police led by Wichit Intorrasorn held a press conference at noon to announce the arrest on murder charges of the 43-year-old Lao national identified only as ‘Eddie’.

Mr Wattana, a 20-year-old resident of Rassada, returned to the table with two large bottles of Leo beer instead.

This sent the Laotian into a rage. He took one of the bottles and smashed the youth in the left temple with it, then took the sharp remains of the bottleneck and sliced the man’s neck as he lay on the ground.

Witnesses rushed the man to Vachira Phuket Hospital, but he died on the way.

When Chalong Police arrived they found the Lao covered with blood and babbling his confession.

He will be charged with premeditated murder.

Police collected as evidence the bottleneck, known in Thai language as paak chalaam because it bears a resemblance to the open mouth of the great white shark that appeared in the blockbuster movie Jaws.