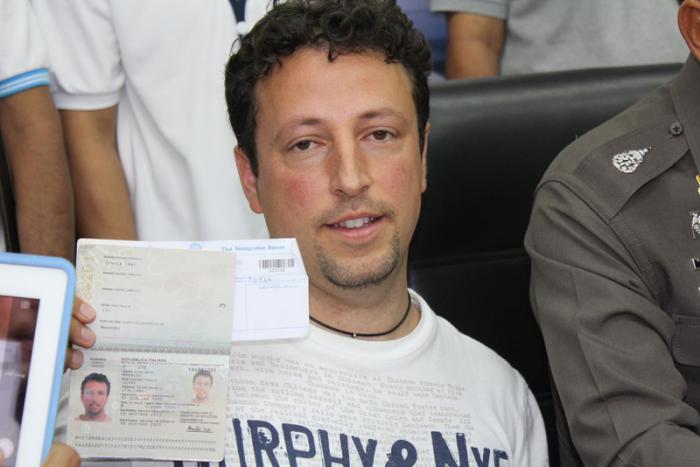 PHUKET: Police have admitted they are powerless to prevent motorcycle and car rental operators from holding foreign tourists’ passports as collateral against potential damage to rented vehicles.

The news comes as the island’s top police officers try to stymie the fallout from international news reports branding Phuket a key source for stolen passports in the wake of the mysterious disappearance of Malaysia Airlines Flight MH370 last Saturday (story here).

One of the passports was taken from a massage salon in Patong that was holding the essential travel document as collateral (story here).

“Something needs to be done, especially after learning that these two passports were used to board the plane,” Phuket Provincial Police Deputy Commander Arayapan Pukbuakao said on Wednesday.

“We are looking into what measures we can take, but as far as I know, there is no law in Thailand prohibiting foreigners from handing his or her own passport to another person to hold as per their own agreement.”

Col Arayapan said his officers will launch a campaign calling for rental vehicle operators to refrain from holding passports.

“They must understand that every passport remains the property of the government that issued it,” he explained.

Such campaigns have been held time and again in Phuket, usually resulting from a collective, concerted push by ambassadors and honorary consuls. Last July, Tourism and Sports Minister Somsak Pureesrisak himself blankly called for an end to the age-old practice of foreigners’ passports being held as a condition of renting motorbikes, cars and jet-skis (story here).

As recently as February 27, following reports of foreigners using a third party’s passport to rent and then steal several motorbikes on Koh Samui and in Krabi, Patong Police Deputy Superintendent Akanit Danpitaksat reminded vehicle rental agents that they were permitted to hold copies of passports, but not the original documents themselves (story here).

Regardless, the practice remains.

Although Col Arayapan confessed his officers were powerless to take action against vehicle operators, he warned that tourists were required by law to carry their passports at all times.

“Foreigners must be aware that if they fail to present their passports to authorities when requested, they could be fined or even deported,” he said.

The pressure to clean up Phuket’s raging stolen passport trade follows Italian tourist Luigi Maraldi having his passport handed over to a man who claimed to be Mr Maraldi’s “partner” while Mr Maraldi was on holiday in Phuket last year.

Mr Maraldi, 37, was listed as a passenger on Flight MH370, but was later found safe at a guesthouse on Nanai Road in Patong, and in possession of a new passport.

Somsak Sornsut, owner of BN Massage in Patong, which was holding Mr Maraldi’s passport last year as collateral on a motorbike he had rented, explained, “We kept his passport at the shop but, if he needed it for any reason, he could come back and borrow it as long as he returned it by the end of the day,” he said.

“My staff called to tell me that a foreigner had come to collect his passport. I asked her who and she said Mr Maraldi. I knew that he always brought his passport back to the shop in time, so I let my staff give it to him.”

“My staff said she showed the man she thought was Mr Maraldi four passports and let him choose his own. The man collected one of them and left another in exchange, saying it belonged to his wife,” Mr Somsak said.

“She did not doubt that it was Mr Maraldi because the man who collected the passport looked similar to the picture.”

Mr Somsak said he had forgotten about the exchange until Mr Maraldi came to the shop asking for his passport.

“I told him that he had already taken his passport and had yet to return it,” said Mr Somsak.

“We then checked all the passports we had and called every customer to ask if they had taken the wrong one. All of them confirmed they had not.”

After waiting three days in case someone returned the passport, Mr Somsak and Mr Maraldi reported it missing to the Patong Police.

Mr Somsak told the Phuket Gazette that he knew holding passports was wrong, but claimed he gave tourists a choice.

Regular customers were exempt. “If we know the person well enough, all we require is their passport number,” he said.

Letter from the Phuket Governor: Creating unity in a time of discord