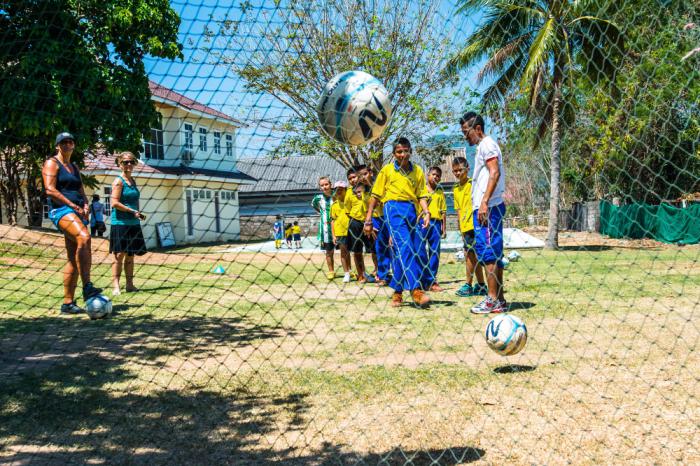 PHUKET: Yesterday morning, March 13, the Palm House International School Rawai hosted a football skills clinic for their students, as well as a group of fellow students from the nearby Wat Sawang Arom School.

The clinic was a joint effort organized by the two schools along with the head of the “Mushy Peas” Phuket FC fan club, Richard Dillon. The Wat Sarang Arom School students have visited their counterparts at Palm House once before, to join in on some cricket fun, and the football get-together was the continuation of that successful collaboration.

“The reason for having this event was primarily arranged as a charity function between Richy’s [Dillon] company [propertyforsalephuket.co.uk], the school and the Mushy Peas, which are going to be coming together and donating sports equipment to the local [Thai] school,” says Palm House International Head Teacher John Kelly.

“We went to the school and said ‘what would you like’,” explained Kelly. Kelly and Dillon have amassed a collection of sporting equipment including footballs, tennis balls, skipping ropes, stop watches and will be gifting them to the Wat Sarang Arom School on behalf of their respective organizations.

“It’s a joint effort between the school, Phuket FC and the supporters club [Mushy Peas] and we just want to show that we really care about the community that we live in and we want to help out in any way that we can,” says Dillon.

“The other reason for this is about the two cultures mixing together, meeting together and not just passing each other in cars on the street, and not being able to talk or be near each other. This is a nice way to break the ice between the groups,” says Kelly

Kelly said that he has extended the invitation for Wat Sarang Arom school children to visit the Palm House school once a week to join in their school activities in an effort to integrate the international school kids into the local community.

“It is a fantastic opportunity for both sets of students to practice their language skills and learn about each other’s culture in a safe and controlled environment,” Kelly explains.

“These children came today on a school holiday, we arranged it for today and then we realized that they were on holiday, so we said ‘do you still want to come?’ They said ‘yes’, so I went with the school buses today to bring them over and they were dancing in the street by the school when I arrived,” says Kelly.

Dillon envisions more community service on behalf of the Mushy Peas, such as a training day, clinic and field trip to a Phuket FC game for a local orphanage.

Phuket Police go for the balls to unite Patong