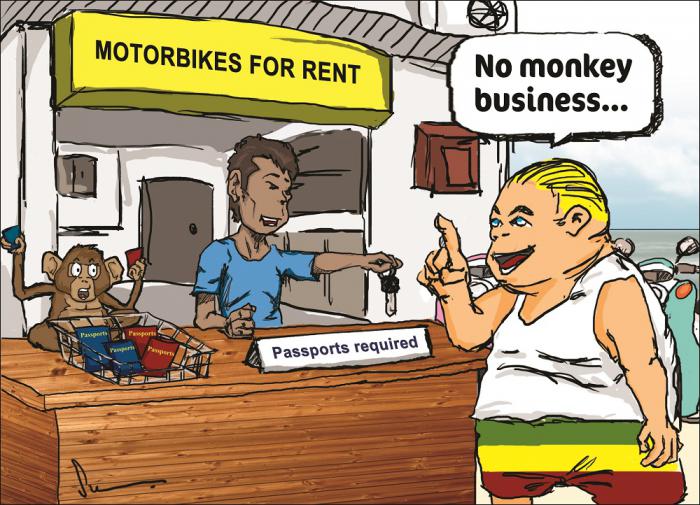 PHUKET: The revelation that two passengers aboard the ill-fated Malaysia Airlines Flight MH370 were travelling on passports stolen in Phuket (story here) once again highlights the need for a serious and sustained crackdown on the use of travel documents as collateral on motorbike, car, and jet-ski rentals.

The need to end this ridiculous practice has already been the subject of much futile editorializing in this space. It is also one of the most consistent complaints during the equally futile meetings of Phuket’s honorary consuls with the ever-shifting brigade of government leaders on the island.

A much overlooked aspect of the widespread use of passports as collateral on financial transactions is the fact that it is, and always has been, an illegal practice.

While these documents are borne by the individuals in whose names they are issued, they nevertheless remain the legal property of the government that issues them, which can demand their return at any time.

These facts are clearly stated on passports issued by every country, at least that we are aware of, along with reference to statutes that indicate how and when they can be legally used. We are not aware of a single country that allows these documents to be used as collateral.

However, those tasked with the enforcement of passport law in Thailand, the police, are generally unaware of its existence. Even worse, many low-ranking officers are actively engaged in the tourist-oriented vehicle rental business, either directly or indirectly, as a sideline to boost their own meager official salaries.

Thailand’s Ministry of Foreign Affairs has been reported as recording some 60,000 passports – both Thai and foreign – as missing or stolen in the 18 months from January 2012 to June 2013.

Even taking into consideration the massive scale of the Thai tourism industry, this remains a truly staggering figure; one which might be significantly reduced if the practice of using passports as collateral could be ended.

Sadly, the fact that those tasked with upholding these laws are among those most actively engaged in breaking them does not bode well for any real change in the status quo in the foreseeable future.

In the meantime, the best avenue is to steer clear of vehicle rental outfits and other operations that demand passports as surety. If dealing with such a place is inevitable, it may be possible to use a photocopy of the first page of your passport with a line drawn through it instead.

Phuket Opinion: Casting aside modern conveniences for an island dream

Phuket Opinion: Changing the way we see with photos