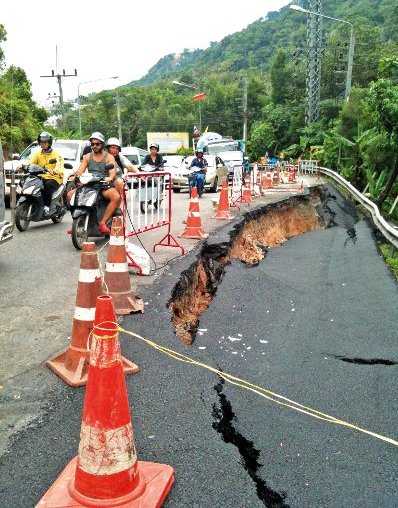 PHUKET: The Highways Department hopes to begin shoring up one landslide-prone section of the road over Patong Hill in June, but work on another section of the same road will have to wait until at least next year.

“We are following this project closely. We hope to gain final approval and begin work as soon as possible in this fiscal year,” he said.

Once approved, his office would have one month to find a contractor to undertake the work, which would be scheduled for completion within 150 days, Mr Sathaporn said.

Under such a time frame, the work would take place during the rainiest months of the year in Phuket and be completed at or around the beginning of the next high season for tourism.

The project site would be a stretch of road on Phra Barami Road eastbound, the breakdown lane of which dramatically slid away during heavy rains last October. It was subsequently patched with a temporary cover, but fears of another landslip in the area are a major concern, even more so after the recent seismic activity in the area.

Funding for repairs will be covered under the government’s budget for emergency repairs for flood damage, although the real cause of the slide was hillside development in the area along Soi Kuan Yang that exposed the base of the road to erosion. Rubber plantation and zinc-roofed homes in a temporary workers camp still occupy downslope areas.

The site is well known to Phuket commuters as it runs along the stretch of road about 100 meters west of the San Chao Phor Suea (Tiger God Chinese Shrine) at the top of the hill, where local commuters typically sound their horn to pay respects to the local spirits that are believed by some to dwell there.

The project would cover a 200-meter stretch of road, extending 60 meters downslope. Workers will bore steel galvanized “soilnails” and install PVC drainpipes into the ground beneath the road to prevent further erosion. When completed, the exterior surface would be covered with “shotcrete” (sprayed concrete), with exposed areas further downslope at lower gradients covered with anchored erosion control mesh.

During construction, the 200 meters of road will be closed to traffic for about five months, Mr Sathaporn said.

His office is also waiting for an additional 5 million baht in funding approval to conduct “permanent” repairs to a section of Phra Barami Road further to the west where a large sinkhole opened up in the middle of a lane in August, 2009, he added.

On the Kathu side of Phra Barami Road, where a landslide toppled power poles and caused a 100-meter section of road near the Patong City sign to slump in October last year, there seems to be little hope that landslide prevention work will begin in fiscal 2012.

Mr Sathaporn said responsibility for this section of the road was consigned to his office from Kathu Municipality only on April 2.

No project plan for landslide prevention work has yet been drawn up by either Kathu Municipality or the Highways Department and the period to apply for funding under the emergency flood repair budget for fiscal 2012 has already closed.

Looking to the future, many officials see the long-term solution as tunneling though Patong to create a new four-lane road. An in-depth study was conducted by Patong Municipality and Cabinet recently assigned the project to Transport Ministry’s Expressway Authority of Thailand (EXAT).Several groups of foreign investors have shown interest in the project, which EXAT Governor Ayyanat said would take about six years and 6 billion baht to complete.