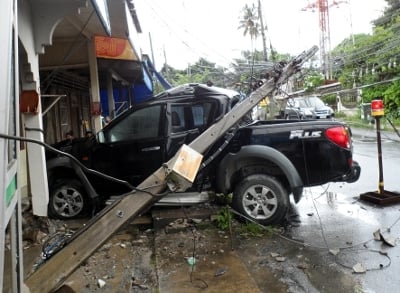 PHUKET: An alleged drunk driver took down a power pole and damaged two Phuket homes and after mistaking a flashing light on the road for a police checkpoint over the weekend.

Thung Thong Police were notified of the accident at 12:45am on Saturday.

At the scene, a densely populated area along Wichit Songkram Road near the Kathu Chinese Shrine, police found a damaged Mitsubishi Triton extended cab pickup crashed in front of two homes, with a broken electric utility pole and tangle of power and communication cables atop it.

There was no reports of injury to his female passenger.

Witnesses said that Mr Salee, who appeared to be in his early to mid-40s, seemed to be under the influence of alcohol. His address was not reported, but the vehicle he was driving had Nakhon Sri Thammarat license plates.

The two homes damaged belonged to Sorkiet Wae-lim, 75, and Somjai Wongraknam, 62. No people in the homes reported injuries from the incident.

Mr Salee was driving fast through the area that when he suddenly noticed a flashing red light set on the road to warn traffic of pedestrians crossing the street to attend a religious ceremony at nearby Kathu Chinese Shrine, according to the Thung Thong Police daily log.

Thinking he had arrived at a police checkpoint, he slammed on his brakes.

The vehicle went into a spin, damaging a telephone booth and knocking over a power pole before finally coming to rest.Thung Thong Police said that Mr Salee will be charged with damage to state property owned by the Provincial Electricity Authority and TOT Public Company Limited.