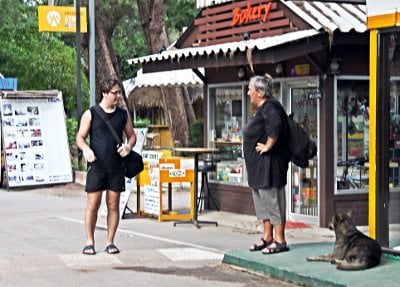 Preedee Aengseng, Communications Officer at the Phuket office of Department of Disaster Prevention and Mitigation (DDPM-Phuket), told the Phuket Gazette that the request will be made on May 16, when NDWC officers come to Phuket to conduct a training session for local DDPM officers and members of other emergency-response organizations.

“This would enable more tourists to understand the tsunami warning message, aiding any evacuation required and possibly saving lives in the event of a tsunami,” Mr Preedee told the Gazette.

The request is the result of the confusion that reigned at Phuket beaches during the tsunami scare on April 11, when the warning towers along the Andaman seaboard sounded the alarm to evacuate.

In the aftermath of that evacuation, the Gazette received several reports of large groups of Russian tourists bewildered as many did not speak English, Thai or any of the three other languages the warning messages were played in.

“Adding Russian would be good because it would help Russian tourists to understand what is going on when the alarm sounds,” she told the Gazette.

Ms Bangornrat pointed out that Russia was currently Phuket’s second-largest source for tourists visiting Phuket, second only to China.

However the decision whether to add Russian rested with the NDWC, she added.

However, NDWC Deputy Director Thavorn Charoendee told the Gazette that he prefers not to add any more language segments to the existing message, which already takes 3 minutes and 26 seconds per cycle.

“If this happens, people will waste time standing around and listening, trying to understand what the message is saying, instead of evacuating the area,” he told the Gazette.

“In fact, I am thinking about making the siren sound [that starts the warning] longer. Whatever language you speak, when you hear sirens you know something is wrong and that an evacuation might be necessary, especially if you see other people leaving,” Mr Thavorn said.

The five languages chosen when the message was prepared in 2005 reflected the most common languages spoken by tourists visiting Phuket at the time, he said.

“At that time most Russians visiting Thailand chose to visit Pattaya, not Phuket. That’s why Russian is not one of the languages,” he explained.

Phuket Tourist Association (PTA) President Somboon Jirayus told the Gazette that the PTA received many complaints that tourists were confused by the warning message.

“What we need is for the siren to be louder and clearer. This is much more important than which languages are used,” he said.

“Also, there are two recorded messages: one announces the evacuation order and the other rescinds it,” he said.

Currently, both messages are preceded by similar siren sounds.

“The sirens [used in the warning and the cancellation] need to be different to avoid any confusion. When tourists hear the first alarm, they move away. But when the second message is played to announce that the evacuation order has been called off, they think it is the first message being played again,” he added.

The spoken message in English reads, “Attention, please! Attention please! The situation is back to normal. Please continue to rescue the victims”.

Although the duration and tones used in the cancellation siren are different from those used in the tsunami warning, overall sounds are very similar.