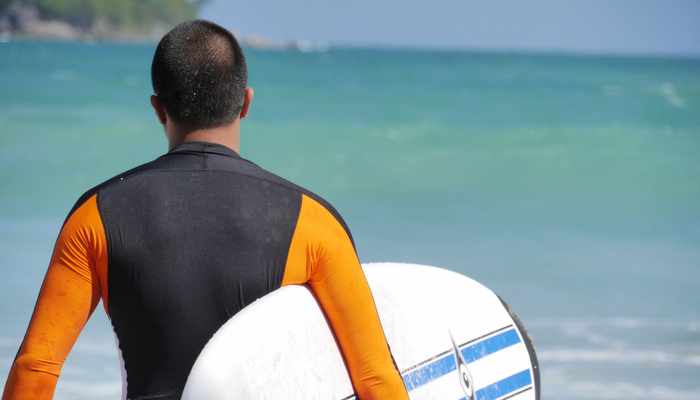 “We used to have our surf event in September, but this year… we just kicked it off to let people know our surf season is starting in Phuket now,” said Surached Mungthong, QS Retail (Thailand) Ltd general manager.

“We are trying to transform ‘low season’ into ‘surf season’ in Phuket.”

Though surfers have been riding the southwest monsoon waves for several weeks now, the event also marked the re-opening of the RE KA TA surf school.

“For this year’s surf season, we are very excited to be collaborating once again with the legendary surf brand Quiksilver in launching the Quiksilver/RE KA TA surf school, which is open to hotel guests, as well as all surf enthusiasts in Thailand, from now until the end of October,” said Boathouse General Manager Marie-Laure Fleury.

Jimmy Smith, 2013 Thailand surf champion, will be on-site at the school throughout the surf season, Ms Fleury explained.

Phuket will receive fairly consistent swell from now until October.

“I think it’s been a pretty well kept secret the last five years about how good the surf actually is in Phuket during the monsoon season,” Paul Hutson, Quicksilver Indonesia chief executive officer, told the Phuket Gazette.

“We came and visited the governor six or seven years ago, wanting to do some events. Since then, we’ve seen a lot more development with surf schools and tourists coming to Phuket for actual surfing.”

A group of students from the Baan Kata School joined the event. They participated in a quick beach cleanup to raise awareness before taking part in a surf clinic, which was also sponsored by Bangkok Airways.

“We like to promote low season here in Phuket, and want people to know that you can actually do lots of activities in Phuket… like surfing,” said ML Nandhika Varavarn, Corporate Communications of Bangkok Airways vice president.