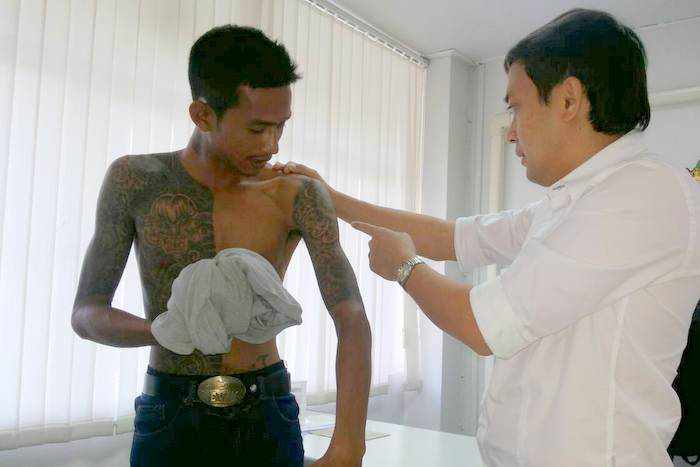 PHUKET: Police have arrested one suspect involved in the fatal stabbing of a Karon hotel employee last weekend in Phuket Town.

The victim, 19-year-old Surasri Jupmatta, and a male friend were pushing their motorbike along Thepkrasattri Road when they were attacked by the gang (story here). Mr Surasri was stabbed in the armpit and the head. His friend was brutally beaten before the gang fled.

“We checked CCTV footage in the area and sent our investigative team to collect information about the suspects. Police questioned witnesses and gathered enough evidence to apply for arrest warrants from the court,” said Col Somsak.

“An arrest warrant has been issued for Mr Rakchart.”

Mr Sudjai told his version of the night’s events to the police after his arrest yesterday.

“Some friends and I were drinking in Saphan Hin. After a while, we left to go to a pub near Rajabhat University,” Mr Sudjai said.

“We saw the two guys pushing their motorbike along the road and Rakchart told me to turn around and stop near them.

“Rakchart and the victim got into an argument and Rakchart stabbed him. Then we rode away. We didn’t know he was dead.”

Mr Sudjai did not mention anything about the attack on Mr Surasri’s friend.

“We are searching for Mr Rakchart and collecting information about the others who were involved in the attack,” Col Somsak said.

Arrest warrants have not yet been issued for any other suspects.