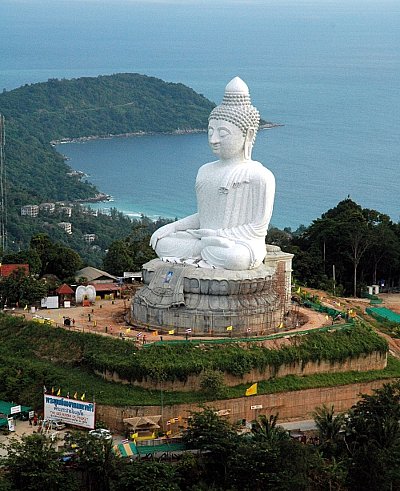 PHUKET: The management of Phuket’s renowned Big Buddha image has come under scrutiny for slow progress and alleged misuse of land and donated funds.

After more than nine years of construction, land officials are now demanding “a clear deadline” as to when construction at the site, high atop a hill in the Nakkerd Range, will finally come to an end.

In a meeting presided over by Phuket Vice Governor Somkiet Sangkaosutthirak at Provincial Hall, land officials concluded they will issue a demand for clarification from the Mingmongkol Faith 45 Foundation, set up a decade ago to build the giant structure.

The foundation must pull down all unauthorized buildings at the site that are not directly related to authorized construction, said Phoppol Sirilugsanapong, head of the Ministry of Natural Resources and Environment office in Phuket.

Buildings that would need to be dismantled include kuti (sleeping quarters for monks) and a large hall used to sell souvenirs such as Buddhist amulets, stage dhamma talks and offer visitors numerous ways to “make merit”, Mr Phoppol said.

Despite completion of the 45-meter-high image, the organization has yet to say when the work will end. And the complex is already beyond the scope specified under the terms of the contract, he said.

The initial contract period, from 2002 to 2006, was extended until the end of this year after the foundation said it needed more time to finish the work, he explained.

If they do not clarify the situation, any further requests for extension might be denied, Mr Phoppol said.

As founder of Mingmongkol Faith 45 Foundation, Suporn Vanitchakul’s responsibility was to build the Buddha image in the allotted time and nothing more, he added.

Instead, the foundation continues to seek donations through the sale of Buddhist souvenirs and erect large structures nearby.

“It’s unclear why it is taking so long to finish the project,” Mr Phoppol told the committee.

Tritip Sakulpradit, an officer at the Muang District Office, said he will examine the foundation’s donation account.

“It will not be easy. The foundation has consistently sought postponement when we request information,” he said.

Mr Suporn told the Phuket Gazette, “We already have a clear design of what we are building on the 42-rai plot of land. Actually, we are only building on about 32 rai. The rest is for car parking and reforestation,” he said.

“Since the budget to build the Big Buddha comes from donations, we can’t set an exact time when the image will be finished,” he said.

“We held a meeting among foundation members and agreed to fight for what is right,” he added.

He had yet to receive any official requests to demolish structures at the site, he said.

“The kuti is for temporary accommodation of visiting clergy and proceeds from the sale of souvenirs are to fund construction of the Big Buddha,” he said.

“Officials can give me their official letters, then we will see what we can do,” he added.

Mr Suporn told the Gazette earlier that he would welcome any audit of the foundation’s finances.

The foundation raised over 200 million baht to fund construction of the image and related structures, including the winding road that provides access to the site.

“Meanwhile there are many expenses, such as paying over 100 laborers,” he said.

Most of the heavy labor at the site, including affixing marble sheets to complete the image’s exterior, was carried out by Burmese workers.

V/Gov Somkiet urged local officials to move on the case.

“If they can’t sort it out themselves, they can ask the provincial office for assistance, he said.