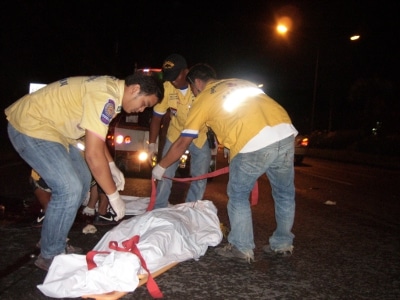 PHUKET: One man was killed and three others badly injured when their pickup crashed near the Heroines’ Monument in Phuket early this morning.

Thalang Police Duty Officer Praman Yomkaphan was informed of the accident at 3:40am.

Pronounced dead at the scene was 23-year-old Rittichi Kaewkhunok, a resident of Nakhon Ratchasima province.

Mr Rittichai died of massive head trauma and blood loss from his right arm, which was severed above the elbow.

The Bangkok-registered truck first hit the guard rail on the curved section of road then crashed into the median strip, said police.

Mr Rittichai was one of two passengers riding in the back of the truck at the time of the crash.

All four men were electricians who came to Phuket from Bangkok to work. They were returning from a night of fun at a karaoke bar near the Heroines’ Monument at the time of the tragedy, they told police.

The owner of the karaoke bar came to the scene and told police the four had been drinking in his establishment not long before the crash.

Rescue workers at the scene said the injuries to the three did not appear to be life-threatening.

Mr Niphon will face minimum charges of reckless driving resulting in the death.