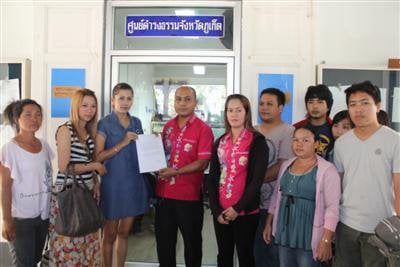 PHUKET: Residents of a residential housing estate in Thalang have filed a letter of complaint to Phuket Provincial Hall, charging that filth from a nearby pig farm is contaminating the local water supply and casting a putrid pall over their community.

Representatives of The Valley 2 housing estate in Srisoonthorn said they decided to file a formal complaint at the Damrongtham Center after efforts to get local government agencies to act yielded no response.

The complaint was filed Thursday at the Damrongtham Center by residents of the Baan Manik community led by Yuwathida Waewwanjit, marketing director of The Valley 2 housing estate, west of the Heroines’ Monument on Srisoonthorn Road.

The group charged that a large pig farm in the area with the name “Thawee Farm Phan” [sic], was poisoning the local water supply and making malodorous miseries of their lives.

“We have suffered from the odor and polluted water problems for a long time. We talked with the farm owner and asked him to solve the problems, but he didn’t take any action. We also filed a complaint with the Thalang Public Health Office and Srisoonthorn Municipality, but we have yet to receive any reply,” she said.

“In the rainy season, polluted water from the farm flows down to the canals and spreads the filth across the whole area, then strong winds blow the odors up into the sky. We want related agencies to solve this urgently,” she said.

Officials at the Damrongtham Center, which serves as the provincial ombudsman’s office, accepted the complaint and promised to pass it along to Phuket Governr Tri Augkaradacha and relevant organizations.

Foul smells are a common source of complaint received by the Damrongtham staff.

In April, a group of dockside residents in Rassada complained of fouls fumes from the smokestack of a decades-old fish-meal factory.

In December last year the management of the Silver Hotel in Phuket Town claimed that the stench from a nearby seafood processing plant was costing them 400,000 baht a month in lost income.

Bt300,000 reward for info leading to killers of Aussie tourist in Phuket