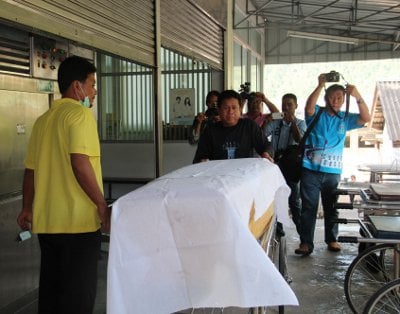 PHUKET: Local officials gathered at Phuket Provincial Hall on Thursday to draw up measures to try and prevent violent crimes like the stabbing murder of Australian tourist Michelle Smith in Kata earlier this week. The slaying has prompted the Government to order beefed up security for tourists throughout Thailand

“The incident that occurred that night [June 20] was totally unexpected,” said Phuket Vice Governor Chamroen Tipayapongtada. “Right now the police are working on producing sketches of the two men from images taken from CCTV footage.”

“We have reviewed all available information and drawn up measures for all organizations to help prevent such a crime from ever happening again,” said he added.

V/Gov Chamroen assured members at the meeting that he had instructed police to increase the number of security checkpoints and asked for amateur radio operators to keep an eye on “high-risk zones” around Phuket.

The vice governor also noted that that local officials had received much support from Bangkok.

V/Gov Chamroen informed those in attendance that a letter of condolence would be sent to the families of both victims on behalf of Phuket Governor Tri Augkaradacha.

Tammee Lee Lynn, a friend of the late Mrs Smith, suffered a slash to her right arm in the same attack.

Meanwhile, representatives of the Australian Consulate in Phuket late yesterday afternoon claimed the body of Mrs Smith from the Vachira Phuket Hospital morgue for repatriation to Australia.

Peerayuth Karachedi, one of the Phuket Provincial Police Deputy Commanders, told the Gazette that police had gained useful information from their questioning of Ms Lynn, local residents and security guards on duty in the area at the time.

Police are verifying the information they received from those questioned and are tracking the license plate number of the motorcycle used by the two men that night.

It has not yet been announced if the motorbike was rented or not. Criminals often use rented motorbikes to carry out such attacks in Phuket, where they can be found for as little as 150 baht per day.

The Smith murder case is one of the most high-profile murders in Phuket since the still-unsolved September 2007 stabbing attack that left 30-year Phuket resident Simen Knudsen dead on a remote stretch of road in Kata.

Although attacks on foreign tourists are not unheard of in Phuket, the nature of Mrs Smith’s slaying has left a deep impact on officials at Provincial Hall.

“We wish to express our deepest sympathies to the families of both victims and assure them that the Provincial Office is taking serious action to prevent such an incident from ever happening again,” she said.

“I instructed every police station and local organization to increase tourist safety measures,” she said yesterday.