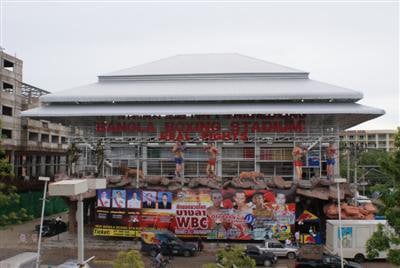 PATONG, PHUKET: WBC straw-weight champ Oleydong Sithsamerchai has been busy shedding pounds to meet the 105lb limit for his WBC title defense against Muhammad Rachman of Indonesia this afternoon.

At a press conference held at the the Bangkok Residence Hotel on Soi Sansabai on Tuesday, Oleydong and Rachman posed for photos with Phuket Governor Wichai Phraisa-ngop.

The fight will take place at the new 3,000-seat Bangla Boxing Stadium, opposite Banzaan Market.

The fight is free and will be broadcast nationwide on Thai TV channel 7, starting at 2pm.

Also on hand at the press conference were Patong Mayor Pian Keesin and Piya Issara-malai, General Manager of the Tiger Entertainment Group which just finished construction of the stadium earlier this month.

The fight is being promoted by Petchyindee Boxing Promotions Ltd.

The new stadium should establish Phuket as the undisputed boxing capital of Thailand’s Andaman Coast region, he said.

Oleydong has reportedly been working out at the Simbi Muay Thai Camp in Rawai, where he is on a fruit-only diet and trying to sweat off the two remaining pounds he needs to shed to get under the 105lb limit.

It will be the third title defense for the fast-fisted southpaw from Trang’s Ratsada district.

He will enjoy the support of more that 200 die-hard supporters coming in three buses from his home province.

The word is that they have more than 1,000 firecrackers on hand, which they will light off after Oleydong vanquishes the 37-year-old Rachman, who will be stepping into the fight for the 75th time in his career.

Other matchups on the undercard:

There will be also be a Muay Thai boxing event at the same venue that evening, with tickets at 2,000 and 3,000 baht.

Starting at 7pm, these will feature an exhibition between Contender Asia Champion Yodesnklai Fairtex and two-time K-1 Champion Buakaw Por Pramuk. The fight will also be broadcast live on Thai TV Channel 7.