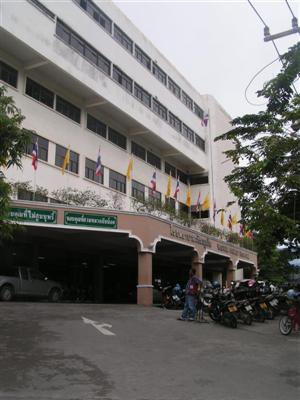 PHUKET CITY: The mother of the German youth incarcerated in the Phuket Juvenile Observation and Protection Center on charges of sexually abusing minors died last month, the Gazette has learned.

The woman, who will not be named in order to protect the youth’s identity, died in Vachira Phuket Hospital on April 23. She was 56 years old.

The youth was allowed out of the detention center under police escort to attend her funeral.

German Ambassador to Thailand Dr Hanns Schumacher, who has been taking an interest in the youth’s case, said, “The death of his mother has certainly put him down. But he is well treated in prison.

“To be honest, I was impressed by how reasonable and calm this young man is under these circumstances, taking into account that he has spent the best years of his childhood under these miserable circumstances. We want to help him.”

The youth is being held on suspicion of conspiring to sexually abuse young boys in Patong, together with Dax Young, a 41-year-old British citizen.

For our previous report on the youth’s continuing incarceration, click here.

Though the Gazette has been unable to confirm the exact cause of death, it is known that the woman was seriously ill with chronic obstructive pulmonary disease (COPD) for several years prior to her passing.

Interviewed in March with her daughter, she appeared to be suffering from anorexia and looked deeply unwell.

Since the mother moved to Phuket with her two children in late 2003 she suffered several severe bouts of the disease, resulting in hospitalizations in Phuket International Hospital (PIH), Bangkok Hospital and Vachira Hospital.

During a stay in PIH at the end of 2007, she discovered she was no longer covered by her health insurance.

When she was unable to pay her hospital bills, German Honorary Consul for Phuket Dirk Naumann became involved.

He urged her to return with her children to Germany, where social welfare would see that she was cared for.

But she refused to do so.

“She officially said she was afraid to go back because of the father of her children. I told her she shouldn’t be afraid because he’s sitting in prison for [an unrelated] attempted murder,” said Mr Naumann.

The woman told the Gazette she fled to Phuket four years ago to escape this man, who had become abusive and threatening when their relationship broke down.

When asked why she was determined not to return to Germany – despite the man’s imprisonment – she gave a number of reasons, including the effect of the climate on her condition and “the German mentality”.

The family remained in Phuket, supported at least partially by donations from friends and neighbors.

The German diplomatic mission suggests that the youth – and his sister – supported their mother financially, and that in the boy’s case some of the money came from Dax Young.

The woman denied that she received money from her son, and that she knew the true nature of her son’s relationship with Mr Young.