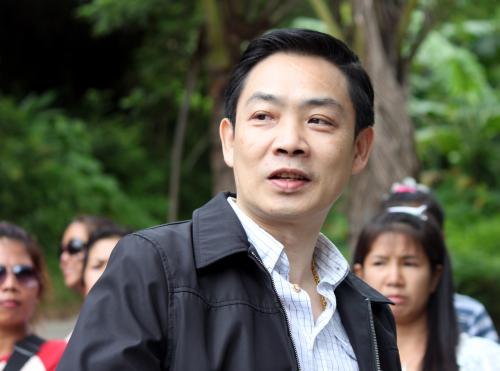 PHUKET: The investigation by the Public sector Anti-Corruption Commission (PACC) into allegedly illegally issued land titles covering more than 500 rai of land in Phuket has silently been dropped.

The PACC, set up specifically to fight corruption among government officials, quietly dropped the probe into hundreds of Phuket land titles just days after Col Dusadee Arayawuth, who had initiated the investigation, was transferred to the Ministry of Justice on October 1 last year, the Phuket Gazette recently discovered.

Among the land titles being investigated were land ownership documents for prime beachfront real estate north of Patong Beach and choice plots along a golf course in Kathu.

One plot under investigation is said to be located in a protected forest. The title for the plot was approved by a former Phuket vice governor and seven officers from related agencies. A hillside resort is now operating on the site.

In the investigation into the hillside resort, Col Dusadee issued a press release naming 16 officers from a variety of government agencies deemed responsible for abusing their positions in the case. Among those listed were officers of the Phuket Land Office, the Kathu District Office, and the Forestry Department.

With the PACC now dropping the inquest, not a single government officer allegedly involved in the illegal issuance of land titles in Phuket will be brought to answer by the PACC.

“The new Secretary-General, Pokpiboon Potranun, shut down the ‘Special Operations Unit’ set up by Col Dusadee to carry out the investigation into land titles being illegally issued in Phuket,” the government officer told the Gazette on condition of anonymity.

“I have no idea why this decision was made. I just have to follow the order,” he added.

While in Phuket conducting his investigation in August last year, Col Dusadee told the Gazette that the PACC would “investigate every single plot [suspected of being illegal], especially any land owned by, or involving, any former or current government officials.”

“No matter how high ranking they are,” he said, “if they are found guilty of encroaching on [or assisting others to encroach on] public land, they will be prosecuted without exception.”

PACC it all in, Phuket