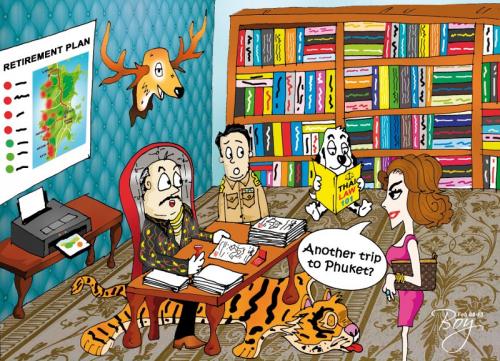 PHUKET: This week’s exclusive lead story in the Phuket Gazette newspaper about the decision of the Public-sector Anti Corruption Commission (PACC) to shelve its investigation into encroachment cases here in Phuket comes as a disappointment – but not much of a surprise.

Phuket has a long history of land probes, all of which are motivated by political forces. In the 1990s, wealthy Phuket families were found to have been issued land title deeds on plots designated under the Ministry of Agriculture’s SorPorKor program, intended to make degraded state land available for use by landless farmers. The political scandal led to the collapse of the coalition government led by then-Democrat party leader Chuan Leekpai.

Fast forward a decade to 2003, when then-Prime Minister Thaksin Shinawatra was at the zenith of his power. This was the same period in which his Thai Rak Thai party launched another onslaught of probes related to the SorPorKor project in Phuket, one of the power bases of the rival Democrats.

With Thaksin effectively having regained power in 2011, did it really come as any surprise that Phuket would once again become the focus of a land probe? The real mystery is why the PACC’s “Special Operations Unit” – its ‘fangs’ – were quietly removed last October. Perhaps former PACC head Col Dussadee Arayawuth simply did too good a job during his 43 days in office. In the end, exposing so many high-ranking civil servants for [alleged] corruption may have turned out to be less expedient than doing the same to political rivals.

The sad part is that few if any of these land “probes” are actually launched with the true intention of seeing stolen state land returned to its rightful owners. This, coupled with the fact that we live in a country where politics can turn upside down overnight with a coup, and court cases can take decades to resolve, is why the campaigns are so seldom successful.

Official corruption involving land has a long history here in Phuket. Some of the island’s wealthiest people come from families whose ancestors were granted tin mining concessions. When the mining finished, they threw up coconut trees and claimed they were farming it, rather than returning it to the state, as required by law. None of this could have been accomplished without paying backhanders to the bureaucrats of the time.

The initial enthusiasm generated by the PACC probe makes even sadder the reality that there remains no effective barrier to encroachment leveraged by official corruption. It strikes us as ironic that encroaching on state land remains such a “rich man/poor man” game. That is to say, only the very rich and very poor seem to be able to get away with it. Those of us in the middle, who pay taxes and follow the law, can only sit by and watch as our hillsides are denuded and our mangrove forests destroyed.

This editorial first appeared in the February 9-15 print version of the Phuket Gazette.