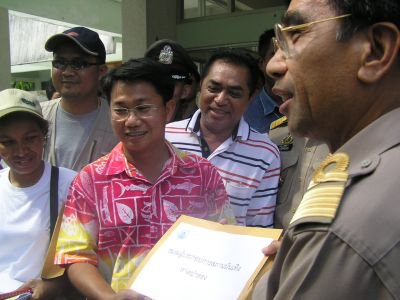 PHUKET TOWN: About 1,000 workers and business owners from the entertainment industry gathered outside the Phuket Provincial Meeting Hall this afternoon to stage a peaceful protest against tighter restrictions on opening hours. The protesters caried banners and placards criticizing the 1 am closing time that is scheduled to be imposed on the island from March 1 as part of the government’s early-closing push around the country. About 200 people traveled from Patong in a convoy of tuk-tuks to join the large crowd in asking the Phuket Governor, Udomsak Usawarangkura, as the government’s representative, to have the decision reconsidered. One of the banners read, “If your face itches and you scratch your backside, will you feel better?” – a reference to the fact that Patong’s entertainment industry believes that young Thai people, whom the government is trying to protect through the crackdown, do not frequent the resort town. The leaders of the protest pointed out that the island – and especially Patong – was a popular destination for foreign tourists who would find the new closing time restrictive. The governor was invited to join representatives of the industry on an official committee to examine the needs of Phuket and its strategies for tourism. He was also urged to push for the closing time to remain at the existing 2 am until the committee delivers its report. Gov Udomsak said that the attitude of the people in the entertainment industry had frequently been conveyed to Deputy Prime Minister Purachai Piemsomboon – who as Interior Minister was previously responsible for implementing the Better Social Order policy – by his predecessor as Governor, Pongpayome Vasaputi. “We have never ignored the issue, then or now,” Gov Udomsak told the crowd. The entertainment group decided to go ahead and set up its own investigating committee, with eight representatives from Patong and eight from Phuket Town, and attempt to compile a report before the March 1 deadline.

B300m to be spent on Phuket’s roads

Chicken back on the menu