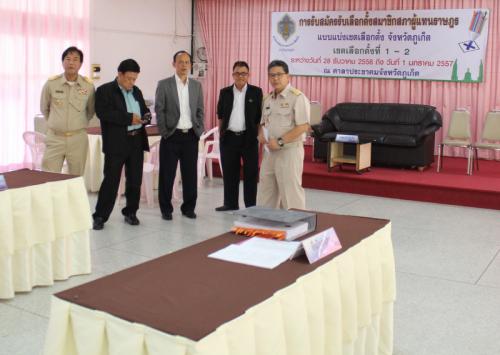 PHUKET: Island protesters on the path to political war, armed with only a mourning gift and whistles, forced the Phuket Election Commission (PEC) to close MP registration ahead of schedule, leaving zero candidates put forward to represent the province.

“We don’t want to have an election on February 2,” said former Rassada Mayor Suratin Liangudom, who led the protest this morning. “Yingluck Shinawatra must resign from all her work in politics, and the protesters in Bangkok must succeed in the formation of the People’s Council before any elections are held.”

The rally in Phuket today kicked off at 8am, with protesters gathering at the Community, where the PEC had set up the registration.

“Today, we come in peace, without weapons. We come only with whistles and a gift for the PEC. We want them to recognize that the people of Phuket are not ready for an election on February 2,” Mr Suratin said.

The gift, traditionally placed next to a coffin, was accepted by Phuket Vice Governor Somkiet Sangkaosuttirak.

“The PEC has a job to do, which it was assigned to do. Though it was forced to temporarily close registration, and unable to register an MP [candidate] today, it will consider re-opening registration on a day-by-day basis,” Vice Governor Somkiet told the Phuket Gazette.

A total of 40 civil volunteers and police were on site to ensure there were no incidents, added V/Gov Somkiet.

iBless to put on Phuket charity concert for typhoon victims