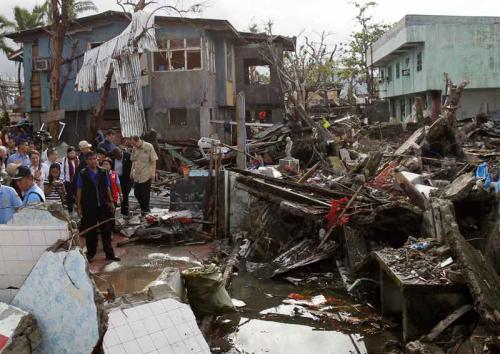 PHUKET: Local Filipino community project iBless Philippines is putting on a charity concert tomorrow to help those still suffering from the devastation of Super Typhoon Haiyan.

The show, ‘Music for a Cause’, will showcase six local Filipino bands at Molly Malones Irish Pub in Patong.

Committee members are asking that all who attend make a “ticket donation” of 250 baht. The ticket is good for a free drink, and 150 baht from each ticket sale will go directly to the iBless Philippines project.

Drinks will be priced at 150 baht each, with 50 baht from every purchase going toward the charity, explained Ms Sanchez.

“Tomorrow is for helping those suffering from the effects of the worst typhoon we have ever seen. People are recovering, but it will not take a month or even months; it will take much more time for them to recover. People still need our help,” said iBless committee member Maan Cambonga

Committee members are expecting a packed house to help raise over 100,000 baht at the event.

“This project is an addition to several other projects we have done to help the Philippines. This one is especially coming from the musicians in Phuket who are willing to play and donate their talent and time,” Ms Cambonga said.

This isn’t the first concert put on in Phuket to raise funds for the Philippines, as Black Eyed Peas superstar apl.de.ap put on a last-minute, unscheduled show at Xana Beach Club in November (story here).

“I like to do hands-on personally… because [with] everything we’ve done; I’ve always been there,” apl.de.ap explained when talking about the charity he works with in the Philippines. “So I see what’s happening, so I don’t feel lost. I feel like something is going on.”

Like apl.de.ap, the members of iBless Philippines are committed to seeing exactly where the funds they raise are being put to use. The last round of donations raised by iBless Philippines, which included 2,700kg of emergency supplies and almost 140,000 baht, was hand delivered by committee members to those in need (story here).

The funds raised at the ‘Music for a Cause’ event will be delivered to the Philippines early next month by two committee members, said Ms Sanchez.