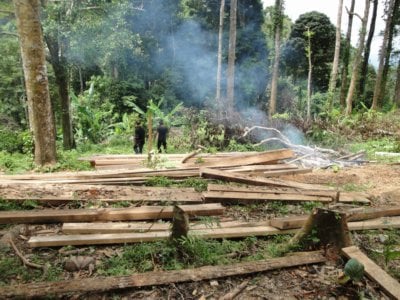 PHUKET: In just six years, the rate of destruction of Phuket’s forests has almost quadrupled, figures from the Office of Natural Resources and the Environment show.

In 2004, 66 rai of forest were destroyed in 15 recorded cases of land encroachment.

This year has already seen 62 cases of land encroachment, with the destruction of 239 rai of forest.

The stark figures were revealed at the first meeting of the new Board of Prevention and Suppression of Deforestation, chaired by Governor Wichai Phraisa-ngop at Provincial Hall on Wednesday afternoon.

In a tense gathering of representatives from almost 20 different government departments, Gov Wichai demanded an end to official collaboration in the destruction.

“From now on we are going to have to communicate formerly on paper, not just over the phone, because we’re going to take this seriously. I’m saying this because I just want everyone to do their job properly in protecting our forests,” he said.

Wasan Sonthichai, a former provincial forestry officer, said it was important that departments knew exactly what aspects of forest protection they were responsible for and what they were expected to do. “Otherwise they just say ‘it’s not my job’ or ‘I’m not responsible for this’,” he said.

Suthra Na Thalang, a member of the forest protection board, said out-of-control tourism development was the problem.

“I’m afraid tourism is going to destroy Phuket. If we want to develop the tourist industry, let’s make sure we have a plan to preserve our forests,” he said.

Governor Wichai has a plan.

He presented the assembled officials with a new four-pronged strategy to prevent deforestation.

First, if any illegal action is detected, the officers who detect it must make arrests and report the incident to the governor’s office.

Second, each department must report to the Board of Prevention and Suppression of Deforestation at a monthly meeting.

Third, there must be more co-ordination between relevant departments.

Fourth, more new trees need to be planted to replace those being cut down.

The board will meet again next month.

The full Office of Natural Resources and the Environment figures for forest encroachment in 2004 – 2009 are as follows:

Struggling Phuket families get homes of their own