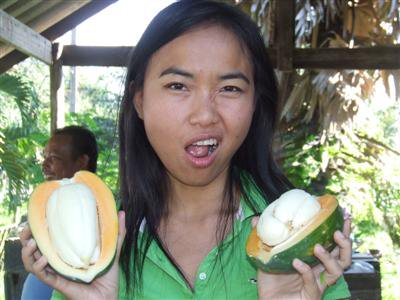 PA KHLOK, PHUKET: Villagers in Pa Khlok are unsure whether two recently discovered agricultural oddities are signs of good luck – or eerie harbingers of man’s impact on the environment.

The strange specimens were found on the grounds of two local primary schools located side-by-side in the small coastal community of Ban Thala.

Manoj Hawharn, a janitor at the Phuket Panyanukul School for special needs children, discovered the first as he was preparing to cut down some old banana trees growing at the school.

The trees are a locally popular variety of the Musa banana called kluay namwah in Thai.

Defying the odds, one of the trees had an enormous clump of bananas sprouting not from the treetop as usual, but from the center of its stem.

“I have never seen anything like it in my 45 years of life. My mom said ‘Don’t touch or do anything to it. Just leave it be.’ …So we didn’t cut it, but waited for it to die naturally,” he said.

Word travels quickly in a Thai village and before long scores of villagers were making their way to catch a glimpse of the bananas, many hoping the fruit would somehow convey to them the winning numbers in the upcoming lottery draw.

As is the tradition in such cases, a small area was cordoned off with colored cloth and an altar erected allowing villagers to pray and make offerings of food and drink to whatever spirits might be present.

School janitor Arun Naknan told the Gazette he counted 16 bunches of 14 bananas each.

Local lottery vendors can expect a run on the various combinations of these numbers, which are now deemed lucky.

As if the miraculous bananas were not enough, just half a kilometer away on the grounds of the Weerasatree Anusorn School staff discovered a papaya tree also producing very strange fruit.

The center of a normal papaya is full of black seeds, but the fruit of this tree contained another complete papaya fruit improbably nested inside the original.

Mr Arun demonstrated that it wasn’t a ‘one off’ by cutting off two of the fruit and slicing them open.

“All of the fruit from this tree are the same. I first noticed it as I chopped down the first one that ripened. They look like twins or as if the fruit were having a baby. It is very rare, I have never see this before. Not many people know about it yet, so I really would like to protect this tree,” he said.

Naratporn Nilbut of the local Agricultural Extension Office confirmed to the Gazette that both cases were indeed rare, if not unique.

“I haven’t seen anything like them in my seven years in Phuket,” she said.

She had a possible explanation for the strange fruit, however.

Climate changes might be responsible for causing mutations to the normal cell division processes, she said.